17 October: International Day for the Eradication of Poverty

Editor: It's just over a year since the 17 Sustainable Development Goals (SDGs) —a definitive plan for people and the planet —were officially adopted by World Leaders at the United Nations General Assembly in New York. We were given a vision of how the world could look in 2030. What a wonderful world (01:34) it could be! 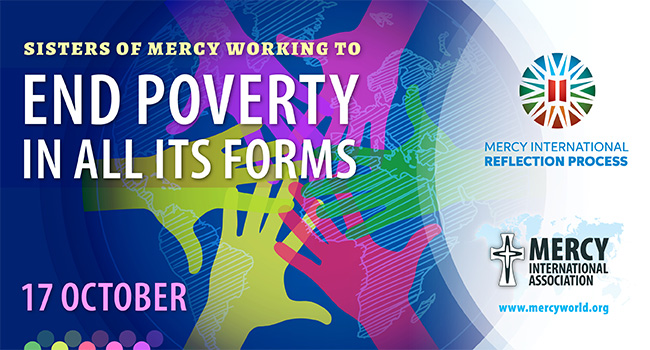 Image: © 2016 MIA. This image is available to any Mercy group who would like to use it. Please contact the Editor

Next week marks two UN Observances - World Food Day (16 October) and the International Day for the Eradication of Poverty (17 October). The themes of these days reflect concerns expressed in the SDGs, Laudato Si’ and the focus issues of our MIRP global groups.

The theme for World Food Day this year, 'Climate is changing. Food and agriculture must too', emphasizes the direct connection between climate change and hunger.

The theme for this, the 30th UN International Day for the Eradication of Poverty, 'Moving from humiliation and exclusion to participation: Ending poverty in all its forms', ambitious as it seems, is considered within our generation's grasp to achieve.

Over the next two months until Mercy Foundation Day, 12 December 2016, the date adopted by MIA to formally conclude the Year of Mercy and the MIRProcess, MIRP groups will nominate local, regional, and global actions out of their new vision. We look forward to hearing about these planned actions.

What a wonderful world it could be!

'Saving our planet, lifting people out of poverty, advancing economic growth... these are one and the same fight. We must connect the dots between climate change, water scarcity, energy shortages, global health, food security and women's empowerment. Solutions to one problem must be solutions for all.'