An update has been received from the Global Catholic Climate Movement (GCCM) regarding the delivery of the global petition on 28 November. 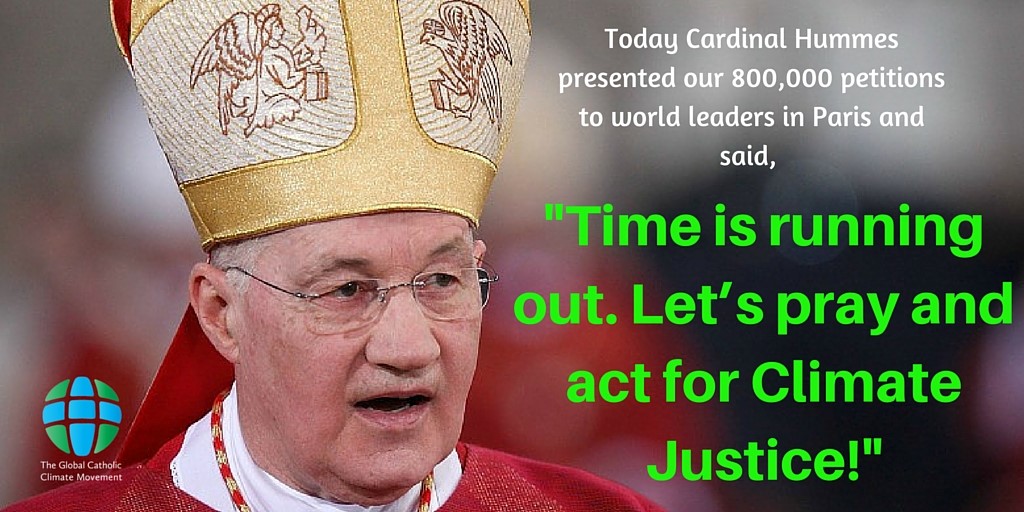 'Just hours ago, Cardinal Cláudio Hummes of Brazil presented over 800,000 of your Catholic Climate Petition signatures to United Nations and French officials in Paris along with the petitions of other interfaith groups. Collectively the messages of over 1.7 million people of faith calling for climate justice were delivered from all over the world.

During the event, Cardinal Hummes stated, “I pray for political leaders to “hear both the cry of the earth and the cry of the poor” (Laudato Si # 49) and to respond to the climate justice demand from faith communities.”

This is a new moment in history, as we Catholics are helping to shape the future of our climate in historic numbers. We bring a special contribution, along with other faith groups, of elevating the moral and spiritual dimension of this crisis. This is a question of living our faith to care for others, especially the poor and vulnerable among us.

Cardinal Hummes ended his speech today with, “Time is running out. Let’s pray and act for Climate Justice!”'

MIA is pleased to have helped facilitate the signing of the petition by members of the Mercy family. Our partnership with GCCM enabled us to embed the petition on our website and encouraged us to keep highlighting it in Mercy eNews and on mercyworld.org homepage.