A Celebration Of Commissioning

On Wednesday night, the 17th of November, a Celebration of Commissioning of elected leadership for the Institute of Sisters of Mercy of Australia was held at Mary Mackillop Chapel, North Sydney. More than 160 Sisters who are members of the Institute, as well as visitors from Samoa, Newfoundland and Michigan, celebrated the Eucharist which was presided over by Rev Christopher Toohey, Bishop of Wilcannia-Forbes, during which the commissioning took place. 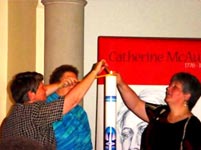 The Eucharist was prepared with sensitive attention to the Institute Mercy story by Jennie Ryan and Carmel McDonough of North Sydney Congregation with the assistance of some students from Monte Sant Angelo Mercy College, North Sydney. It included a Rite of Commitment for all Sisters to the mandate of the 5th Institute Chapter. Within a moving ritual, an acceptance of leadership was made by the new team, Nerida Tinkler, Caroline Ryan and Karon Donnellon. All joined in praying a blessing and in acclamation for the outgoing Leadership Team, Patricia Fox, Paula Smith and Gwen Garland 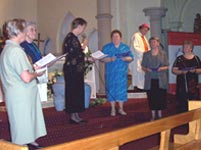 Many remarked on the extraordinary "energy" of this gathering of Sisters. A particularly powerful moment was the heartfelt joining of all voices in singing Catherine's Suscipe". 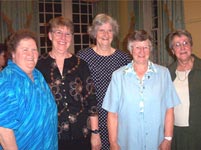