A Heart for Humanity

Editor: On Monday and Tuesday this week (23-24 May), the World Humanitarian Summit was held in Istanbul, Turkey, convened by the UN Secretary-General Ban Ki-moon because the scale of human suffering experienced in our world today is the highest it has been since the Second World War. Bringing together the global community in this way was a first of its kind effort to harness commitment to new ways of collectively working together for the most vulnerable among us. 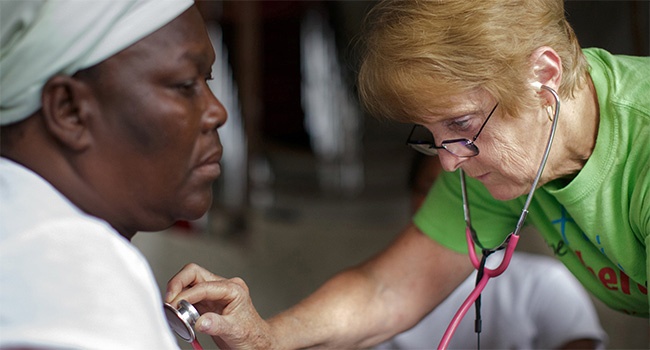 Closer to home, and in an example of what is possible, Sisters of Mercy Urgent Care North Carolina is the recipient of the Urgent Care Association of America's 2016 Humanitarian Award for the staff’s dedicated philanthrophic work in Haiti. That work began in February 2010 when a five-member medical team went on a 10-day mission to work in two hospitals in the Port-au-Prince area following the catastrophic earthquake on 12 January 2010. It has resulted in teams returning to Haiti four times each year since then to provide treatment for prevalent illnesses. This month's visit makes the fourteenth trip.

In accepting the award last month on behalf of the staff, Sisters of Mercy Urgent Care Medical Director Ellen Lawson, M.D. said 'When the devastating earthquake struck Haiti in 2010, we felt the call to serve as emergency disaster relief because we could be the hearts, hands and feet of mercy on the ground in Haiti'.

'Pope Francis has declared this year as the Jubilee Year of Mercy, so the timing of this award has special meaning for us', said Dr. Lawson.