A Tree Grows in Joplin

Editor: When the World Trade Center fell on September 11, 2001, one tree — a severely damaged Callery pear tree—survived through the wreckage and was given the name 'The Survivor Tree'. 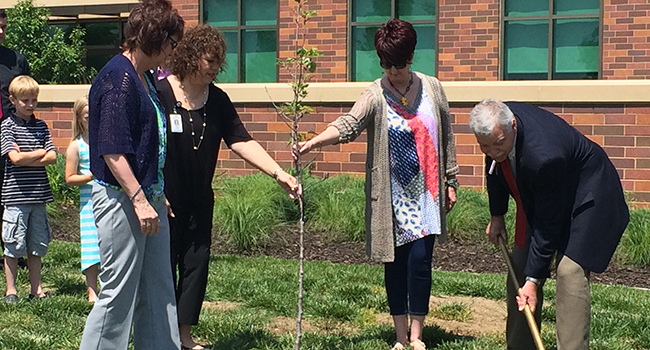 Each year since 2013, the 9/11 Memorial has given seedlings grown from the Survivor Tree to three communities that have endured recent tragedy. The 2015 seedlings were given to Newtown, Connecticut; Madrid, Spain and to Joplin, Missouri where, on 22 May, 2011, 161 lives were lost, hundreds were injured and the city torn apart by the deadliest tornado to strike the U.S. in decades.

Mercy [Health] marked the fifth anniversary of the Joplin tornado on 22 May 2016 by hosting the planting of the Joplin sapling at Mercy Hospital Joplin, the facility which replaced the former St. John’s Regional Medical Center which was destroyed by the tornado.

'We have chosen to place this tree outside an area of our hospital known for its survivors – our cancer center,' said Whit Sanders, Executive Director of Cancer Services at Mercy Joplin, during the ceremony. 'Near the healing garden, we hope it serves as a source of comfort and inspiration to those who are going through treatment. May they remember that they, like the tree, can be survivors. With our roots firmly planted in our community, may this tree remind us of the lesson we learned during the night of May 22, 2011. When we branch out to care for each other, we can grow, even through adversity.”

Image: Whit Sanders, Executive Director of Cancer Services at Mercy Joplin, plants a sapling from the 9/11 Memorial Tree near the cancer center’s healing garden at a ceremony Sunday, 22 May during the fifth anniversary of the Joplin tornado. Photo supplied