Accompanying Asylum Seekers in Their Detention

On this day, (6 May1992), Mandatory Detention of Asylum Seekers was introduced in Australia by the Federal Government with bipartisan support. 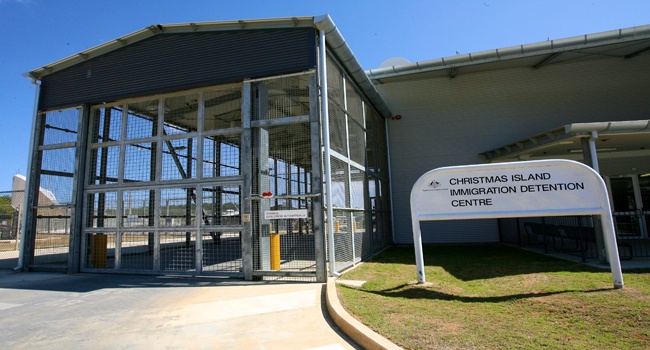 Christmas Island by Christmas was the mantra adopted by Australian Sisters of Mercy and their co-workers in 2009 at the Sisters of Mercy Institute Social Justice conference held in Canberra Australia that year.What did this mantra mean? The conference was held in November 2009 and one of the hot topics at the conference, which had the theme “Embrace the other, welcome difference”, was the growing numbers of asylum seekers who were being accommodated in a purpose built detention centre on Christmas Island, a territory of Australia in the Indian ocean, that was closer to Indonesia than the Australian mainland.

Working in detention centres was familiar to a number of Australian Sisters of Mercy because in the 1980s and 1990s, we had established Mercy Refugee Service (MRS) and in partnership with Jesuit Refugee Service (JRS) had worked in refugee camps and detention centres in SE Asia and Africa as well as with refugees settling in Australia. Sisters with this experience volunteered to go to Christmas Island and Sister Nerida Tinkler, the then President of the Institute of the Sisters of Mercy of Australia, worked with Congregation leaders and JRS to make it happen.

What was significant for us in 2009 was that the detention centres were on Australia soil and frequently in remote areas. The asylum seekers were predominantly from Afghanistan, Sri Lanka, Iraq and Iran and the Australian public had very little visibility of these people and their plight. We were concerned about the conditions of the centres and the messaging the Australian public was receiving about why asylum seekers were attempting dangerous boat trips to reach our shores.

Since May 6th 1992 Australia had mandatorily detained for people arriving in Australia without a valid visa, primarily boat people. This policy was introduced by the Keating Labor government with bipartisan political support. When initially introduced the detention was time limited and for the purposes of security and health checks.

Today Australia still has detention centres on Australian soil. Australia now also has built off-shore detention centres on two of our Pacific neighbours land: Nauru and Papua New Guinea. Since “Christmas Island by Christmas(2009)” we have had Sisters of Mercy placed as pastoral workers in Australia’s largest detention centres. In this role we have not formally counselled or taught, Government contractors fulfil these tasks. Instead we have simply accompanied the asylum seekers in their detention. This has led to extraordinary times of listening, playing and praying with. Friendships have formed and our collective knowledge of conflict and persecution has deepened. We have not been able to change Australia’s policy but we have stayed with those most impacted.

What continues to vex us is the conditions of detention, the duration of detention and more particularly the detention of families and children.

This work is emotionally and spiritually costly and Elaine Wainwright rsm has worked with us to reflect on our detention work using the tools of theological reflection. Pope Francis’s writings have convinced us, if we had needed further convincing, that this ministry is a contemporary expression of our Corporal Works of Mercy- visiting the prisons.

Worldwide in 2014, the number of people forced to leave their homes because of conflict, violence and human rights abuses exceeded 51 million people, the highest level since World War II. Mandatory detention of forcibly displaced people is one more burden on these most vulnerable people.

Messages to: Maryanne Loughry rsm AM