Many Sisters among the readership of Mercy eNews would know of and remember Kath Burke rsm (Brisbane Congregation) who died last week.

Kath was President of the Institute of the Sisters of Mercy Australia (ISMA, 1988-1992) during the establishment of Mercy International Centre and a member of the International Steering Committee. In 'Sharing Memories' of the Baggot Street project in the telling of the story of MIC last year, it was recalled that Kath felt an 'absolute confidence and huge joy that our widely-flung Mercy world would one day be more closely linked and it would be Baggot Street (and perhaps only Baggot Street) that would bring us all together.' 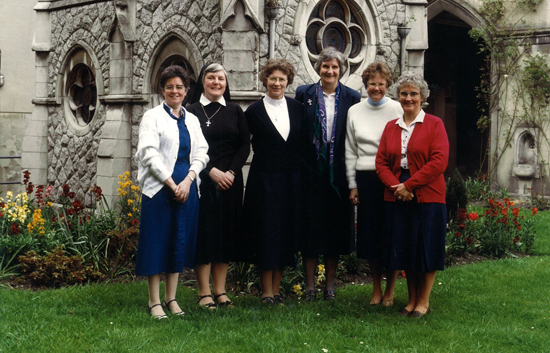 Kath gave voice to the hopes which stirred among all involved as they embarked on the new task of co-sponsoring World Mercy Centre, thus turning dreams into plans:

'We are in a Kairos time, with a drastic demise occurring in some parts of the world, even while our numbers grow in the Third World. Worldwide, there is still enormous creativity and energy. We must utilise both the talent and the technology available among us to ensure the proper telling of our story in all its richness.

Our story is not only the story of Catherine McAuley but of generations of women in whom Mercy has called forth a passionate and realistic response to the cry of the poor. Today the cries have assumed global proportions. We are being challenged to link with one another right across the world so that the Broken Heart of Mercy can enter more deeply into us and embrace God's beloved poor.'

Last Wednesday, 23 July, the 21st anniversary of the opening of MIC, the day on which we proclaimed in many of the languages of the Mercy world, 'This is a Kairos moment in Mercy International Association', when announcing the MIA initiative for the Jubilee Year of Mercy, Kath entered eternal life.

Sisters of Mercy from ISMAPNG, North Sydney and Parramatta congregations will gather with the members of Brisbane Congregation and Kath's family to celebrate her life at St Vincent's Nudgee at 1pm (AEST), tomorrow, Thursday, 30 July.

We invite your prayers together with ours for this generous, visionary and gifted woman.