Sister Deirdre Mullan (Ireland) is no stranger to controversy. Having grown up in Derry in northern Ireland, she is familiar with hate and violence. In her immediate family, however, she learned the preciousness of every life. Her mother stressed the fact that every wounded person was someone’s child. Having witnessed the shooting of a British soldier, her mother put a pillow under the man’s head as he lay dying and for her trouble received a lot of hate mail. Nevertheless she found the soldier’s mother and told her that her son’s last moments were as full of tender care and love as she could make them. 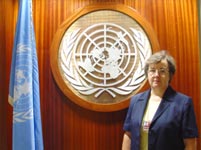 As director of Mercy Global Concern in the United Nations, Deirdre ensures that social justice and environmental concerns of the Sisters of Mercy are addressed by the international body. As a member of the Executive Committee of the UN’s Non-governmental Organizations (NGOs), she is very familiar with the many groups and organizations that share the concerns of the UN and help in the eradication of poverty, HIV/AIDS, violence against women, human trafficking, and racism; support education; and the development and care of the earth. Essential to the help that the NGOs provide is asking the right questions and networking between those who need and those who can help to satisfy need.

She illustrated this by a story of her question put to the Ambassador to Kenya at the UN. She had heard that he was coming to meet with the Working Group on Girls of which she is a member. Prior to the meeting she contacted a sister in Kenya and asked her what question she would ask him were she at the UN. The sister told her of the terrible plight of girl children in Kenya, , who were being sold by poor parents to wealthy families as service slaves and sometimes, sex slaves. When Deirdre met with the Ambassador, she questioned him about this exploitation. After he showed or feigned ignorance of the problem , she produced the front page of Nairobi’s daily paper The Nation which had been faxed to her. It featured the shocking truth.

On another occasion the UN uncovered in the Congo evidence that young girls had been brutally raped as weapons of war. She was able to meet with one woman, who like the others, had been so injured that she required reconstructive surgery in order to have any control of urination. She mentioned this to a wealthy businessman in Derry who immediately wanted to do something about it. He was touched by their sad state compared with his own daughters, whose only thoughts were of proms and dances. He insisted that he needed to do something about it and started a fund to support physicians who will operate on the 90 girls who are in this condition.

“We must give an overriding loyalty to humanity as a whole in order to preserve the best in our individual societies,” says Deirdre. “This calls for a worldwide community that lifts neighborly concern beyond our tribe, race, class and nation. In reality it is a call for an all embracing unconditional love for all people.

Reprinted with permission from VITA, the monthly newsletter for Members and Associates of the Institute of the Sisters of Mercy of the Americas, March 2004 ( Vol.13 No.8)