Editor: Amy Woolam Echeverria is the International Coordinator for Justice, Peace and Integrity of Creation (JPIC) for the Missionary Society of St. Columban (Columban Missionaries). The Columbans, like Mercy International Association, are founding members of the Global Catholic Climate Movement (GCCM) and Amy serves as GCCM's founding Board President. In Australia for meetings last week, Amy gave a talk on the establishment, growth and work of GCCM to Sisters of Mercy, their colleagues and members of other religious orders at the Mercy Action and Spirituality Hub in North Carlton, Melbourne. 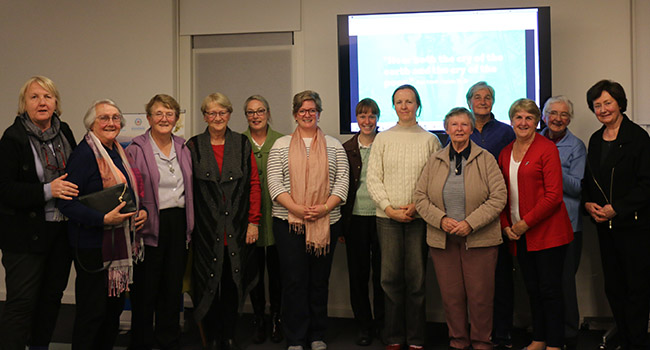 Amy Woolam Echeverria, sixth from left, with Sisters of Mercytheir colleagues and members of other religious orders at the Mercy Action and Spirituality Hub in North Carlton, Melbourne

GCCM, with its membership today of almost 700 organisations, ranging from large international networks such as ourselves, to local parishes and community groups —an ever-growing coalition—clearly is a movement. One impetus for GCCM Amy told us, was born from the NYC People's Climate March in 2014, held two days before the UN Climate Summit intended to kickstart the process to achieve the Paris agreement (COP 21). A number of those present at the march, including Columbans and Mercy Sisters and justice personnel, recognising the need 'to do something' to combat climate change and knowing that Laudato Si' was coming, began meeting weekly on skype. In January 2015, GCCM launched, taking its first brave steps with just  20 partner organisations.

GCCM is organised in a participatory, open-source model, promoting key global moments for action together (such as 18 June anniversary of Laudato Si'),  empowering grassroots through programs and other tools and sharing information and resources for climate justice created by Catholic organisations, such as our Season of Creation calendar.

GCCM's founding document is Laudato Si' and it works to bring the encyclical to life in 3 dimensions: the spiritual dimension through ecological conversion, the lifestyle dimension through encouraging lifestyle changes and divestment from fossil fuels, and the public policy dimension by speaking out and advocating for bold climate policies. More about GCCM's goals can be read here

In Laudato Si' Pope Francis appealed to the whole human family to take action to shape the future of our common home (LS #13-14). GCCM provides ways for us all to take that action as we continue to respond to 'the cry of the Earth and the cry of the Poor' (LS #49) while seeking to become Mercy Global Presence.

How to become involved