In 1995, the members of the Mercy International Association dreamt of justice ministry in a new way. Their plan was to gather representative sisters from the member congregations, so that something new could be born. This first Mercy International Justice Conference was to take place in Baggot Street in June of 1996. 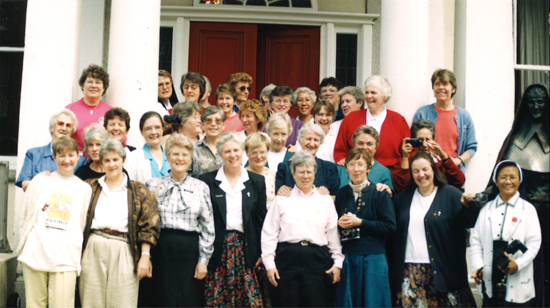 As the newly appointed Justice Coordinator for our congregation, my first task was to participate in a conference call with the representatives of the other Mercy congregations. At that time, I lived in a community of more than twenty sisters, with one much sought-after telephone between us, so I knew that to take the call from there was a non-runner! Instead, my parents graciously gave me their telephone and the use of their kitchen, as I waited for the call that would be one of the many firsts of this story.

Voices were varied and represented a world of different experiences. From the first, it was clear that our situations varied but our commitment to an end result of working together for the good of those most in need was solidly shared. We began to identify each other and to have some idea of how this conference could be planned. Some tasks fell naturally within the Irish sphere, as doing some research with regard to possible facilitators, booking rooms in MIC and organising local finance. When we finally met in the international room, it was most intriguing to match voices with faces.

Our chosen facilitators were two Louis Sisters: Anne Murray and Anne Kavanagh. They brought us through initial work to get to know each other and our issues, on to the identification of how we might work as team. A new big idea came into being, of working together in five geographical zones, thereby crossing congregational boundaries. Another idea came from the Institute of the Americas, who arrived as five full-time sisters, working in the justice ministry. They had been exploring being recognised as an NGO at the United Nations and now suggested that this might be done as a whole network. This was the seed for Mercy Global Concern. Four were asked to further the new concept of organisation: Wendy Flannery, Dale Jarvis, Pat Hartigan and myself. We were not chosen to represent the different canonical units but rather as impartial facilitators of a new Mercy network.

Our work during the next years brought us to already established conferences in the Latin American and Caribbean area, and another in the Asia Pacific area. In this way, we worked within existing structures to further the concept of Mercy Justice, to facilitate the identification of issues pertinent to the specific area and the personnel to represent them within the whole network. The Institute of the Americas had an existing structure and now needed to encompass Canada. A new configuration began to emerge in the European Geographical Area. The African Geographical Area was also new. Two conferences helped its growth. One held in Zambia, had Seán McDonagh SSC as its main contributor. Mercy brought him on his maiden visit to Africa! The other in Kenya had Wangari Maathai as a central speaker. She was awarded the Nobel Peace Prize later for her work with regard to deforestation. All this time, the designated team continued to meet by conference call and to report to MIA meetings. Alongside this, the UN desk became established under the auspices of MIA.

Central uniting issues were the call for the cancellation of unjust international debt, that was crippling majority world countries and a commitment towards Fair Trade. It was wonderful to work alongside other NGO’s with similar objectives and thereby to meet with World Bank and International Monetary Fund officials, bringing the case for cancellation of debt from the viewpoint of other Mercy sisters, who saw its effects firsthand.

Part of the dream from the first conference was to hold another one, once we were more established. This took place in the Sizanani Centre near Pretoria, South Africa in September of 2001. Much generosity was involved in bringing a larger, more representative group together, gathered now from the grassroots, rather than from administration. A large donation from the Union of Great Britain helped fund the conference, as did most generous sponsorship from the Irish provinces to bring sisters from more impoverished lands. 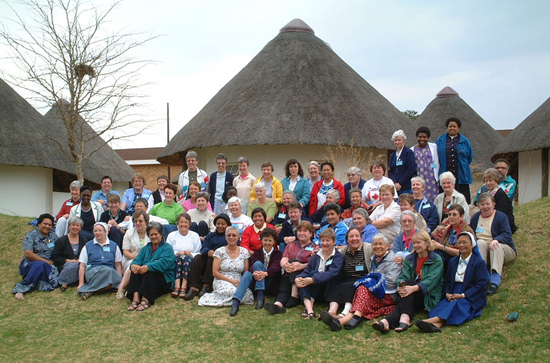 Our facilitators gave their expert services for a mere stipend. They were, Mary Waskoviak (who had been a leadership representative at the first conference) and Goretti Rule (who was not long back to her native South Africa from a mission in Rwanda). They harmonised beautifully and brought us through identification of issues to the point of making a shared commitment to action. Pat Fox was with us as representative of MIA and spoke of the story that brought us to this point and the innovation central to it. Input was given by Father Filip Fanchette on the phenomenon of globalisation and how we were actually creating Social Capital through our gathering, something recognised by the participants. All happened under the beautiful umbrella of South African hospitality, which included tours of historical points in Soweto and visits from many of their students. They even gave us the gift of a braai, a South African barbeque!

It is important to note that we began the conference with a tour of the wonderful facilities for severely disabled children. As we made our way around the building, we could see on televisions what became known as nine eleven. What a backdrop to a justice conference.

Due to its multicultural base, this conference was bilingual, with both Spanish and English. Our translators were Cecilia Heduan and Cáit Wims. Cecilia was not well at this time and died some time after it. Yet, though expert in both languages and well experienced in the world of translation, she stayed late many nights translating documents and exploring the nuances of words. Her dedication was exemplary. Cáit has since become well known for her proficiency and expertise at translation. Her self-effacement and quiet presence added greatly to the conference’s overall integrity.

Another important feature of this conference was the presence of Adele Howard. Her sensitive, discrete and professional witness to our deliberations led to the bringing out of an inspiring fifty minute video. She also took some footage which became part of the Mercy and Justice Shall Meet CD, which was used effectively to raise awareness in many Mercy circles.

The Mercy International Justice Network is no longer in existence in its early form. Nevertheless, Mercy Sisters continue to work together to make this world a better place. We see this through the energy of Mercy Global Concern at the United Nations and in the various issues that continue to be promoted. Notable among them are MECPATH, which seeks to stop sex trafficking, and the great work done in the face of the post-modern ill of fracking. I hope that MIJN has contributed to such positive action in no small way. I would like to conclude by paying tribute to the MIA members in 1995, whose vision put the coordinated ministry of justice into a central place in the Mercy world.