When I was asked to be a part of the team bringing Sr M. Clare Augustine Moore's manuscripts into the digital sphere, I immediately said yes, with no real thought for the practicalities, or what the work might entail. It was simply for the joy and inspiration of being able to spend time with these beautiful pieces of art. I also had little idea of how, in the silence of the Heritage Office, the illuminated manuscripts would whisper stories of their creator to me. I certainly did not expect the gift of discovering a portrait of our dear Catherine McAuley, by the hand of one who knew and loved her.

The manuscripts were digitally photographed by David Knight and someone was needed to study each page and pick out key words relating to the visual and written content. These keywords will then be combined with the photos, to make a searchable digital archive, of all of Clare Augustine's illuminated artworks. Writing the keywords was where I came in. At first, I focused on the two versions of the Register of Profession, and in these, one can find numerous Saints, some of whom look quite specific in features, as well as some figures who may, or may not, be based on people whom 'the Artist' knew. However, without recourse to other portraits or written descriptions, it is near impossible to determine if her illustrations had basis in reality. Nonetheless, those pages told their own stories - the material choices that Clare Augustine made; the specific details she included; and the utmost warmth in the care given to some pages over others... When taken hand in hand with the known characteristics of their creator, these become quite suggestive as to her personality and, potentially, her knowledge of, and affection for, particular Sisters.

The real discovery of interest, however, came when I moved on to the illuminated Rule and Constitution of the Religious Sisters of Mercy. Unlike the Registers, where nearly every page has uniquely different illustrations and borders, the Rule and Constitution has an ornate frontispiece, a couple of beautifully crafted pages at the beginning of each half, and then, for the most part, more simple decoration on the pages of text. Only pages of very specific importance - the beginning of the Chapter on Union and Charity, for example - have her characteristically detailed illuminated borders. With less visual detail to summarize into keywords, I came quite swiftly to the opening page of the second part of the manuscript, entitled "Of the Superior and of the Visitation of the Monastery". In the previous manuscripts, I had become quite familiar with identifying the Saints used in illustration - particular colours and symbols identifying most, if not all. And it was easy enough to identify Our Lady at the top right, St Catherine of Sienna middle left, and Sts Peter, Paul and Patrick in the centre of the bottom panel. Easy, too, were St Augustine on their left (a favourite of the artist, it goes without saying!) and St Brigid on their right. The man in the historiated initial is named in small writing as Pope Gregory XVI - unsurprisingly, as the Rule was given approval under his pontificate. But who were the two remaining figures, bottom far left and right? 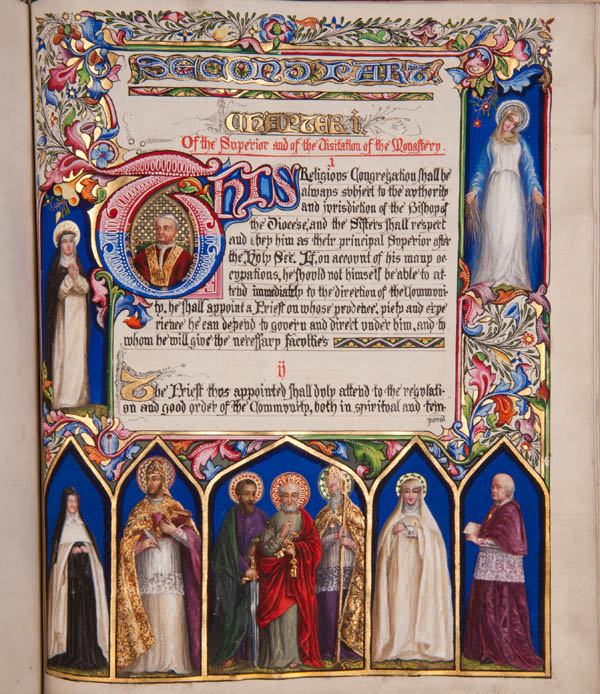 There was never any question in my mind that they were both specific, "real", people. Everyone else identified above played a role in either patronage of the Church, of the Order, of the Country - and in the creation of the Rule. When traced back, as Mary C Sullivan rsm notes in Catherine McAuley and the Tradition of Mercy, the Mercy Rule can actually find much of its core basis in Augustinian Rule1 . Further, the man on the right looked so unique, with his deep, lined forehead, and detailed clerical garb. Of all Catherine's clerical advisors, Archbishop Daniel Murray seemed the most likely - it was he who had advised on the Rule from the beginning - and a quick search of Google images proved the theory right. The painting is near identical to Thomas Farrell's statue of him in St Mary's Pro Cathedral, completed in 1855.

Who else could the remaining figure, dressed in full Mercy habit, be, but Catherine?

Her placement: Directly below her own patron, St Catherine of Sienna. Opposite her trusted friend, confidante and advisor, Daniel Murray.

Her physical appearance: Taking Clare Augustine's own written description - "very fair with a brilliant colour on her cheeks, still not too red. Her face a short oval but the contour was perfect. Her lips were thin and her mouth rather wide, yet there was so much play and expression about it [...] Her eyes were light blue and remarkably round with the brows and lashes colorless but they spoke. In repose they had a melancholy beseeching look; then it would light up [...] Her nose was straight but thick. [...] She was remarkably well made, round but not in the least heavy. She had a good carriage, her hands were remarkably white but very clumsy, very large with broad square tips to the fingers and short square nails." 2 And, if any other description should be needed, Sr Mary Vincent Harnett wrote of her "...well proportioned and erect; her eyes grayish-blue and large, with a penetrating, but very benign expression; her deportment dignified and reserved, yet most kind." 3 (my emphasis added in both quotes.)

One particularly striking similarity between Clare Augustine's written description, and the remaining miniature portrait, is the eyes that are "light blue and remarkably round with the brows and lashes colorless." This is a highly unusual feature in any of her illuminated portraits. Saints and Sisters are habitually depicted with varying shades of brown eyes and dark eyebrows. There are three other women on the page in consideration, all unique in features, and all with dark eyes that are more oval than round. The same can be said for most of the menfolk, barring the aging St Patrick, who has vivid green eyes and greying eyebrows, and Daniel Murray, who appears to have hazel eyes. History does not relate if this is factual!

Most of all, though - why wouldn't it be her? Why would Clare Augustine go to the pains of illustrating numerous other unique individuals, and then place a generic Mercy figure, or an unspecified other Sister as the final figure? She wouldn't. Interestingly, note how St Augustine looks at Catherine, and not forwards - breaking the otherwise symmetrical balance of the bottom panel - I think this is indicative of Clare Augustine's own regard for the woman she called "Foundress".

Well at this moment, you may imagine my excitement! I took the discovery, first to Mary Kay Dobrovolny rsm, Asst. Director for Heritage, and then, together, we went to Mary Reynolds rsm, Executive Director of Mercy International Association. As far as anyone was aware, it was the first time this portrait had been noticed! The next step was to try and establish when it might have been painted.

Going by the specific translation4 of the approved Italian version of the Rule that is used, it seems certain that Clare Augustine cannot have started this manuscript before 1864. As she died in 1880, that gives us a clear sixteen year period. It is difficult to suggest an exact timeframe within that, but, given the transition of Clare Augustine's illuminated work from stylised in the earlier Register Manuscripts, to the highly realistic images in the Devout Exercise in Honour of the Sorrows and Joys of the Mother of God5 and the Book of Flowers/Short Prayers and Ejaculations, it can be supposed that the Rule and Constitution was completed within the 1860s. Further, although it is clear from her unfinished work that  Clare Augustine worked on more than one project at once, by her own admission the last decade of her life was one of "infirmity"6 - something which shows through in her penmanship occasionally7 - and as this is not seen within the Rule and Constitution manuscript, it is safe to assume that it was completed before 1870.

It is well known that Mary Vincent Harnett tells that the Limerick Community8 of the time cast aspersions on the portrait attributed to Clare Augustine that was painted with reference to Catherine's death mask. This brings into question how reliable an image we might consider this 'new' portrait to be, especially given the lapse of time from Catherine's death to the supposed date of creation. However, it is clear to see that Clare Augustine's portrait of Daniel Murray is a good resemblance - and he died in 1852, just eleven years after Catherine, at least twelve years before Clare Augustine could conceivably have painted his miniature.

We can never know definitively how true to life the miniature portrait is - just as we will never know exactly how similar to Catherine Sr Raphael Nelson, the model for the well known 1886 portrait, copies of which hang in most Mercy Convents, actually was. But the similarity between these two, and other early portraits of her, is there - and the miniature certainly matches up with the written description by the same artist. For myself, I cannot help but think it is the closest we may ever have - created by one who knew her, and who had an artist's eye for detail as well as the skill to represent those beloved features in paint.