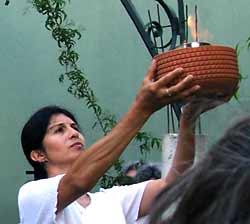 During the week of December 9-17, 2006, sisters and associates from Argentina marked the transition of the Argentine community from the Sisters of Mercy of the Americas, Regional Community of Detroit to the newly-formed Caribbean, Central America and South America (CCASA) Community. They also celebrated 150 years of presence and ministry of the Sisters of Mercy in Argentina.

Joining in the remembrance and celebration were members of the Detroit Regional Community, the Sisters of Mercy of the Americas Institute Leadership Team and the Mercy community from Adelaide, Australia, one of the foundations made by the Argentine community when they were forced to flee Argentina in 1880.

On December 12 * Foundation Day * around 50 associates, colleagues, and sisters talked, walked, prayed, and remembered the 44-year period of Argentina and Detroit's union. But the past was not the only focus. Rather, the relationship was honored for its ability to move beyond itself to witness to the importance and possibility of an international and multicultural reality.

Joined by co-ministers and people who have been or are currently being served, the Mercy community in Argentina celebrated the Eucharist and hosted a barbeque on December 16, 2006, closing the yearlong remembrances.

Messages to: Sharon Gragant Director of Communications
Sisters of Mercy of the Americas Regional Community of Detroit