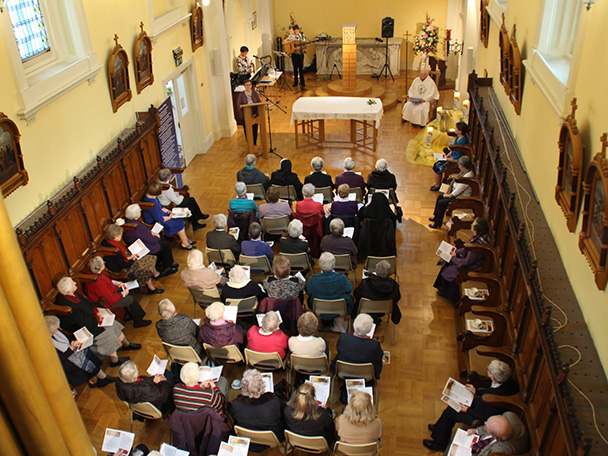 The celebration was marked by Eucharist followed by lunch. People came from all four provinces in Ireland, and included visitors from Great Britain and Australia. Many of the friends in Mercy were people whose relationship to the house and Catherine McAuley is quite new – persons who have been praying regularly in the Baggot St chapel during this Year of Mercy and persons who are part of the Sunday Mass group that since October gathers weekly at Baggot Street. The Mass booklet can be accessed here (7pps; PDF)

Mary Reynolds rsm (Executive Director, MIA) welcomed everyone to the commemorative celebration, and John Byrne osa was the presider for the liturgy. The readings included a passage from Paul’s letter to Philomen, Catherine’s poem Sweet Mercy! and Luke’s parable of the Good Samaritan.

As Brenda Dolphin rsm (Postulator for the Cause of Catherine’s Canonisation) broke open the word, she encouraged those gathered to reflect on the times in which we have experienced the Mercy of God and to allow those experiences to deepen our commitment to be mercy to others around us. Sr Brenda highlighted the theme of forgiveness in Pope Francis’ writings on mercy, and in both the first and second readings for the day. As ones who have received forgiveness and mercy, we are called to be a reconciling presence in our world, a world full of division and injustices.
Sr Brenda's reflection can be downloaded here [A4 Paper size]; [US Letter size] (5 pps; PDF)

After communion, Mary Reynolds rsm read an account of Catherine’s final hours, which included Catherine’s request for a candle to be placed in her hands as the community prayed the last prayers. She then highlighted that with Catherine’s death, the spark that illuminated Catherine’s life is now the legacy of those of us who follow in her tradition. In order to ritually embody that commitment to live and be that living spark, Sr Mary asked each person to light the candle of their neighbour while saying ‘Spirit of Catherine, live on in you and me.’ Each of the candles provided was made by Kathy Higgins rsm (The Congregation) with the candle filling the inside of a tea cup. While candles were being lit person by person, Marie Cox rsm and Patricia O’Donovan rsm (The Congregation) led the congregation in singing ‘Go Light Your World’ by Christopher Rice. For those not familiar with this song, a version is included below.