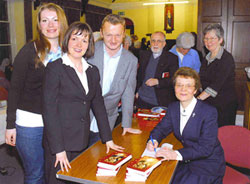 Sister Kathleen M Murphy’s new book In the Spirit of Pentecost was launched at St Catharine’s Convent in Edinburgh on Tuesday, April 30th. It was a wonderfully happy celebration for the community, clergy, sisters, friends and family members. Sr Dominic Timmins welcomed everyone on behalf of the community and Sr Aelred ensured that refreshments were freely available. Elizabeth Quigley of BBC Scotland did the official launch praising the book in glowing words and telling the gathering that until she read the it she never knew of those wonderful women, who did so much for the church, are now hidden from its writings.

In a short PowerPoint presentation giving guests a taste of the book, Kathleen spoke about the Post Pentecost role of Mary, Mother of Jesus as homemaker and catechist, emphasising how Mary would reflect on her life with Jesus to new converts: her joys and her sorrows, her pride and her pain. She would tell them about the washing of the feet, and the breaking of bread, stressing that Jesus had not looked up to see whether he was washing the feet of John or Judas, a saint or a sinner, a women or a man. How he included Judas at the Eucharistic table on an equal footing with his her, the other women, Peter and the discipleship. He simply served the community in the way he had been taught as a boy; and in his new role as Redeemer he would continue to be present to God’s people in a special way every time they broke bread. Kathleen then spoke briefly about some of the other women as follows:

The un-named girl in Philippi who had been 'possessed,' and who was used by her masters as a clairvoyant and prostitute until Paul healed her while Lydia provided the water for baptism. The girl’s story alerts us powerfully to the enslaved today – the 600,000 to 800,000 women who are trafficked across international borders annually for sexual purposes. Kathleen pointed out how the Sisters of Mercy in the UK responded to this contemporary slavery, in 2000 by opening the 'Women at the Well Centre' at Kings Cross in London as a re-training centre in an effort to restore each of these unfortunate victims of male-greed and crime to their God-given dignity, remove them from the streets, and through education and therapy, enable them to take control of their own lives.

Euodia and Syntyche, the two leaders of the church at Philippi whose disagreements would have caused a schism had it not been for the non-judgmental and diplomatic intervention of Paul whose skills in conflict resolution brought about reconciliation and renewal. In pointing out the four steps which he took, she suggested that they still form a valuable conflict resolution model in both parish and in religious community life today.

Phoebe the deaconess and Junia the Christian evangeliser and ex-prisoner: As deaconess Phoebe was Paul’s delegate to Rome, the city in which Junia had suffered imprisonment because of her evangelising activities in the months after the first Pentecost, and years before any male apostle set foot in the city. In conclusion and quoting directly from her book, she said: “This whole area of diaconate and the current ministries involved therein has become one of great sensitivity in the Catholic Church in recent years. It is not a topic for public discussion but it is an issue deserving of reflection and prayer. A faith community that dismisses the unique qualities that faith-filled women bring to holistic ministry risks depriving its members of distinct ingredients in what it means to be a truly Pentecostal or a Spirit-filled Eucharistic Community. Modern evangelisers such as Ita Ford, Maura Clarke, Dorothy Kazel and Jean Donovan learned the real cost of evengelisation when they were martyred in El Salvador in 1980. Like Phoebe, Junia and their co-workers these dedicated evangelisers understood the demands of the Spiritual and Corporal Works of Mercy. They could have made the words of the late Archbishop Romero, their motto “Let us not forget: we are a pilgrim church, subject to misunderstanding, to persecution, but a church that walks serene because it bears the force of love.”

(Kathleen’s new book is on sale at Baggot Street, St Paul’s bookshops in Ireland, UK and via Kathleen including P&P from Edinburgh: Ireland €9.50, UK £8.40 and USA $20. 00. Prices have not yet been worked out for Australasia. Further details about the book are available here).