Baggot Street. Catherine's House. Mercy International Centre. Each are shorthand terms referring to that treasured house at the centre of the Mercy world. They conjure up an image or feeling for that "small house" Catherine built in a Georgian neighbourhood in Dublin in the 1820's.

Catherine McAuley had a plan for that house. She would provide a haven for a few women in distress as well as provide a place to educate young Irish girls who had no avenue for education under the penal laws of the time. 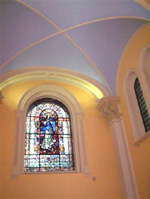 How extraordinary Catherine's vision...her plan for the house. Her plan for the house even included a public chapel, even though she herself had no intention of founding a religious order. That chapel, which is the size of a small church, was opened to the Catholics of the area in Catherine's time. That tradition is carried on as the smaller oratory is open on weekdays for business people and other passers-by to stop in to pray before the Blessed Sacrament. The larger chapel is now used for daily Mass for Mercy International team members and volunteers, programme participants and overnight guests.....as well as for tours and special Mercy celebrations.

The chapel of Catherine's House on Baggot Street has just been repainted and brought into the spirit of its Georgian neighbourhood, thanks to the sponsorship of the Sisters of Mercy of Oaklea, Sunderland (England) on their 160th anniversary of foundation. Walls of golden paint accentuate the colours in the stained glass windows of the saints. The blue ceiling above the tabernacle complements the stained glass window of the Assumption of Mary. The new paint leaves one with a sense of warmth in a chapel that has seen much life and commitment in the years since Catherine included it in her house plan.