On Sunday, April 29, St. Andrews Church on Westland Row celebrated its 180th anniversary. Because of the close connections of the Church in Westland Row with the Sisters of Mercy in Baggot Street, we received a special invitation.

When the Church was built in 1832, it was a sign of hope to a depressed people, who had suffered the ravages of the Penal Laws but who with the new found confidence of Catholic Emancipation looked forward to a new day. A measure of that hope and confidence was the financial commitment that a parish community made to its establishment. The church cost £20,000 to build and was described as ‘perhaps the largest and most costly edifice in the Kingdom’. 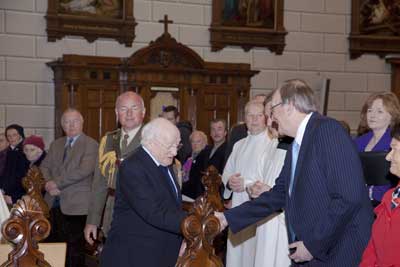 One hundred and eighty years on, the parish community sees the celebrations as a time for renewal and rededication, a time too to reclaim hope. Catherine McAuley and the early Sisters of Mercy were tireless in their efforts to ensure that the ‘new day’ symbolised in the building of St. Andrews would become a reality for the parish of Westland Row in their time. This 180th anniversary of St. Andrews and the 180th anniversary of the founding of the Sisters of Mercy challenge us to faithfully ensure that we ‘keep alive the founding spirit of Catherine among the people most in need of God’s compassion today’. (MIA Vision Statement)