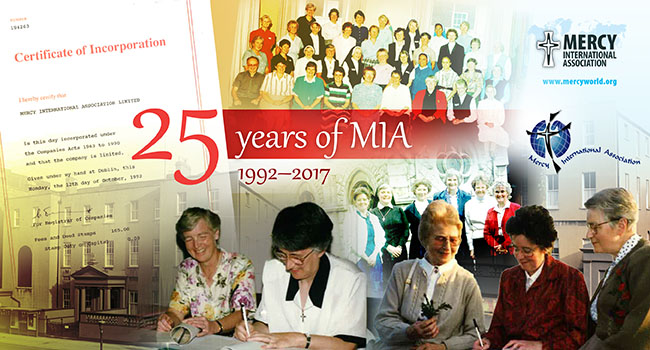 A few months earlier in July, celebrations of the 150th anniversary of Newfoundland Congregation, the first Mercy foundation 'in the new world', had taken place in St John's. An international gathering of Sisters —108 in all— had accepted the open invitation to participate in the celebrations. As a result, representatives from many parts of the Mercy world witnessed the signing by Sisters Paschal O'Brien (Great Britain) and Patricia March (Newfoundland) of the agreement to transform 64A Lower Baggot Street into the Mercy International Centre. The representatives for Australia (Kath Burke rsm), New Zealand (Judith Leydon rsm), Ireland (Regina Kelly rsm), and Americas (Mary Waskowiak rsm) had already signed. The Philippines (Carmela Cabactulan rsm) was to follow.

Mercy International Association is fortunate that the Sisters of Mercy Newfoundland recorded the signing of the agreement in St John's so that we are all able to experience — albeit captured on camera —something of the energy, commitment, courage, collaboration and willingness to risk that characterised the steps in the lead up to and on that day to bring the vision for MIA into reality. Writing of these events recently, Patricia March rsm said, 'As Sisters of Mercy we cannot but be astonished at how far we have come in our collaboration'.

We give thanks for all those Sisters of Mercy then and since whose brave hearts, generous spirits and herculean efforts have brought us this far. 'United in that spirit and story, we [re]commit ourselves to preserving the best of the past, fostering the best of the present and shaping the best for the future'.