On Easter Sunday morning, I along with several others went with the priest to one of the out station communities for Mass – a lovely little community set in the bush. I imagine it was probably only about 10 kms from the main church in Wanepap but because of the state of the road it took an hour to get there! In one place there was a big washaway and we had a very narrow strip of track to navigate – a bit scarey! The road was too bumpy to get any good photos of the track as you can see from below. 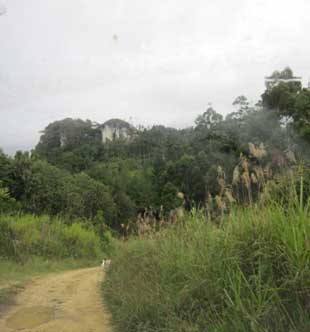 Road on the way to Tumbioq – Easter Morning

There are 13 outstations which are part of the Wanepap Parish and Tumbioq is where we went Easter Morning after Mass as the main church is one of the closer stations. Several apparently are only accessible by foot. The priest goes to as many as he can by road and the rest he walks too – not all of course on any one weekend!

The Easter ceremonies were generally a bit earlier than is customary due to there being no regular source of power and as well many people had steep mountains to climb once the ceremonies were over and this would have been difficult in the dark and wet. We had the Easter Vigil at 4 pm – and just got the lighting of the fire and Paschal Candle in before it started to pour with rain. As well as the usual Easter Baptisms at the vigil we also had a wedding which was a little different I thought, but nevertheless appropriate. 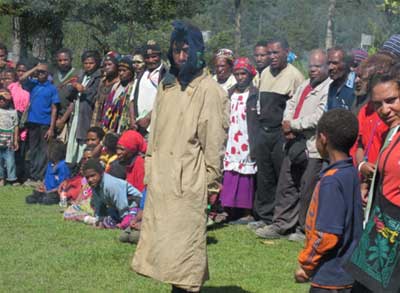 They whipped the poor Jesus all the way along the journey. He had a white robe on, which was covered in a red dye from the plant they were using as the whip by the time we got to the end of the journey. It was all very solemn and fitting – a few stragglers along the way, rather like the first Good Friday I imagine. The character who was cast a Judas looked a shifty character as you can see from the photo.

Many of the people had covered their faces with clay, which is what often they do when someone close to them dies. The woman in the photo was quite close to me, I was very moved by her as we waited for the way of the cross to begin – I think it is one of the better photos that I took that day and it’s a powerful image. 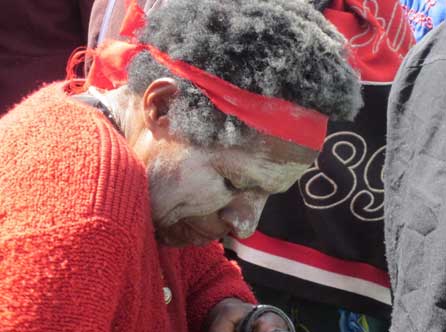 I was sleeping at the Parish guest house as the convent space was filled to capacity – a place with four bedrooms and a very basic bathroom, no hot water and room temperature water was pretty cold believe me – by Easter Sunday I had given up on showering! However the view from the window of my room was very good for the soul. As well as a magnificent outlook I could also hear the sheep munching on the grass outside. The priest has a couple of sheep for meat.

The PMV journey to and from Wanepap was as usual not without it’s dramas! On the way the 15 seater bus was overcrowded, we had 19 adults on board and then about 10 big bags (like a potato bag) of bui loaded in as well. Along the way we were stopped by the police for a routine licence and registration check. Once they saw us and all the cargo there was big talking with the driver and the crew person. After about 30 mins heated conversation between the police and driver as well as a significant amount of money beingpaid as a fine we were on the way again. Still with an overloaded PMV - no person or cargo off loaded. Mind you if we had been off loaded we were in a fairly isolated area along the road. On the return journey the PMV was not overloaded however there was a huge landslide and the people trying to clean it up and make the road passable again charged each vehicle that was wanting to pass – a good way to make a bit of money! On another section of the road the power-line was down – and it was K20 for someone to raise the wire with a stick – that would have been easy money too!! 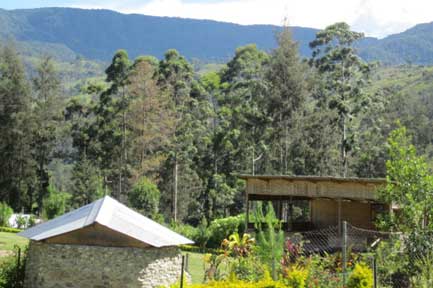 View from my window!

This weekend I have become more aware of the reality of the shape of our Institute and communities as we have had Beverley Strong, the northern community leader with us. All the sisters from the Highlands side of the country gathered here in Mt Hagen, to welcome Bev and to meet with her. Theresia has come with her for a handover time. We are enjoying having Theresia here for a couple of days. We have had a very full house here this weekend - the normal 4 has swollen to 20. Every bit of available floor space had a mattresses on it.