Love bade me welcome, yet my soul drew back,
Guilty of dust and sin.
But quick-ey'd Love, observing me grow slack
From my first entrance in,
Drew nearer to me, sweetly questioning
If I lack'd any thing. 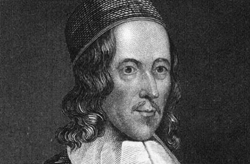 This exquisite jewel of a poem reaches us from the 17th century. Its maker, George Herbert, was an English clergyman, contemporary of John Donne. As indicated, it is the third poem Herbert called Love, and is found towards the end of his collection The Temple.

One of a number of Herbert’s poems shaped in a dialogue between the Soul and God, some more stormy than others, this particular poem exemplifies Mercy through the metaphor of the host and the guest. The context of the meal is a recurring biblical place of encounter between the divine and the human, and of course has resonances with Christian symbolism, evoking the Eucharist. The table is a place of meeting, of insight and of nourishment.

In the poem, the concept of Mercy as Hesed is also evoked in the intimate interaction between the two, Love and the Beloved. We read it in the familiarity of address: “my dear”, in the attuned intimacy of the “quick eyed Love” who “drew nearer”, in the endearing tone of “sweetly questioning…” The Hebrew word Hesed is one of several used throughout the Old Testament to describe Mercy. It is a word of covenant, of the solemn vow between two people, and denotes loving kindness, loyalty, and faithfulness.

The poem evokes such an existing covenant relationship, but one not quite always at ease, where the Soul or Self, beset by self-doubt and guilt, cannot quite dare to believe the finality and fullness of the Divine’s gift. Is this not the human condition?

The main dynamic of the poem, of the dialogue, is the incredulity and sense of unworthiness felt by the “I” of the poem on the one hand, and the tender but authoritative persistence of Love/God on the other. For each demur the narrator presents, God as Love reassures and counters any protests. As well as the Eucharistic theme in the early part of the poem, there are echoes of Psalm 23, The Lord is My Shepherd -“nothing shall I lack”. Much of the language is reminiscent of the Song of Songs and the more anthropomorphic declarations of God found in the Old Testament books of Hosea and Isaiah: the gentle, tender comforter who is also the passionately indefatigable pursuer.

All of this is conveyed through a delicate but lively dialogue, almost entirely monosyllabic, that gathers pace and culminates in the unequivocal pun “Who made the eyes but I?” The intense proximity of the two persons is portrayed in the closely packed monosyllables, in the specific physicality of hand, of eyes and smile, and in the explicit sexual imagery of the first couple of lines. This is a very intimate exchange. This selected physicality- parts rather than the whole figure- also suggests that the Self/Soul can never apprehend or see Love in totality. Again, the human condition: one can never see all of God. There are resonances here of the biblical understanding found in both Old and New Testaments, in Exodus 33.20, for example and in John 1:18- “No one has ever seen God; it is the only Son, who is nearest to the Father’s heart, who has made him known…” The rightness of not seeing all, but glimpsing part, emphasises the awe and respect due to the Divine. It is a relationship full of love and tenderness, but ultimately it is a relationship of Creator with the Created, not one of equality.

After Love’s second irrefutable question “know you not who bore the blame?” which asserts Jesus as Redeemer, the last two lines of this beautiful poem bring the exchange to consummation. Such potent economy of language conveys at once the tender mastery of the God figure and the grateful resignation of the Soul. After all the prevarication and gainsaying of the Soul the final monosyllabic statement “So I did sit and eat” is a simple but resoundingly eloquent Amen. 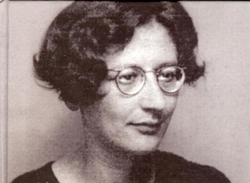 The French philosopher and mystic Simone Weil (1909-1943), a proponent of social justice before it had the label, suffered from acute chronic migraines. She famously had a religious experience as she recited this poem Love (III): “Often, at the culminating point of a violent headache,” she wrote in her Spiritual Autobiography. “I make myself say it over, concentrating all my attention upon it and clinging with all my soul to the tenderness it enshrines… It was during one of these recitations that, as I told you, Christ himself came down and took possession of me.”

It is a poem not merely for reading. This is a poem that should be, in the spirit of Deuteronomy 11:18 “fixed and inscribed” upon our hearts. These are words to be recited in our dreams and in our waking. Its words, if we believe them, if we accept them, if we receive them, lead us into the profound silence of encounter, which in the imagery of the poem means nourishment, sustenance and Communio. May Herbert’s poem be for you a blessing.