Today we celebrate the 180th anniversary of the founding of the congregation. The story of how it came to be fits well into the Advent theme of Mary’s Yes. God’s merciful plan for the world depended on the ‘Fiat’ of Mary. Would she be prepared to listen to the Spirit’s call? Would she risk all in trusting that call? Would she say ‘Yes‘, not knowing where it would lead, what it would cost?. 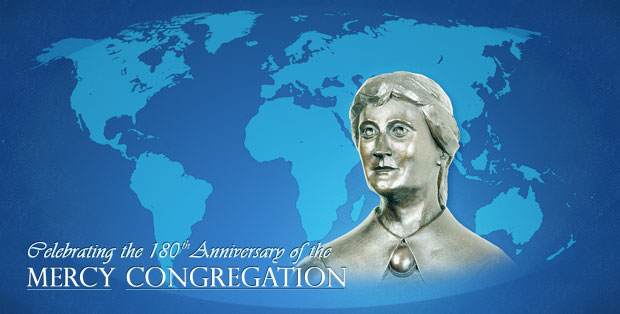 Catherine had plans for what she wanted to do. We are told in the Bermondsey Manuscript that she wanted “to make some lasting efforts for the relief of the suffering and the instruction of the ignorant,” and she thought of establishing a society of pious secular ladies who would devote themselves to their service, with liberty to return to their worldly life when they no longer felt inclined to discharge such duties.

The first step towards the realisation of this dream was the building of the house in Baggot Street, financed entirely from her inheritance of the Coolock estate. As we know, she had her critics, not least of whom was Canon Kelly of Westland Row. When he had been shown around the House, he conveyed convincingly to Catherine that the Archbishop required her to hand over the work to the Sisters of Charity, but attempted to be conciliatory by suggesting that she might like to keep a couple of small rooms and a side entrance for herself.

This news pained her, but she prepared to submit with peaceful resignation, considering that as she had transferred her right over the house to the Archbishop, she ought to acquiesce in his disposal of it,” Mary Vincent Harnett tells us, “she replied, that the Archbishop could dispose of the House as he considered best.”

When Archbishop Murray came to visit, he left Catherine in no doubt that while supportive of her and her work among the poor of Dublin, he was alarmed that she might unwittingly be founding a religious congregation. Eventually he offered her and her companions a choice: they could behave as ladies of their rank and station in terms of their dress and manner of life, or they could assume the duties and obligations of formal religious life.

We can only imagine Catherine’s thoughts and feelings. We are told that after he left she went to her room and did not appear for some hours. Like Mary, she must have been bewildered and asked herself what all this might mean. She had given all to the dream of ‘relief of the suffering and the instruction of the ignorant’, not even keeping a pension for herself. She had given up a house and home. What was going to happen to those for whom she had assumed responsibility: her young relatives, the orphans she had taken with her, the young women of the House of Mercy, whom she had invited to her house as “to their own home”?

But like Mary she pronounced her Fiat . With the Archbishop’s guarantee that, as a religious, she could still pursue her external apostolate and that her Institute would have a status of its own, independent of other congregations, Catherine made her choice.

Mary Clare Augustine Moore notes: “Now, however, she was convinced that to carry on the Institute she must be a religious. This point had often been discussed with her associates who were all in favour of it, but still she shrank from deciding on it. She was no longer young, her habits were formed among Protestants, she did not like ceremony, and some of the ceremonies as used in Convents, such as kneeling to Superiors, were particularly distasteful”. However, in order to safeguard the continuity and stability of her work for her beloved poor, Catherine stepped out in faith along a path she would not have chosen.

We know the sequel - the birth of a new congregation, the first for women in the history of the Church that was not bound by enclosure. With such as this in mind, Catherine would say later: “We should never falter in our confidence that God will make all things turn to the best; we ought conform our views to His, and suffer ourselves to be guided unresistingly by Him as our Leader”.

Catherine, Mary Anne Doyle and Elizabeth Harley made their profession on December 12, 1831 in a ceremony over which Archbishop Murray presided. One of the mottos chosen by Catherine for her profession ring was ‘Fiat Voluntas Tua’- thy will be done. As we recall the story of Catherine’s journey to this Foundation Day of the Sisters of Mercy, we could truly say that life’s crises and transitions broke open into grace for her because she accepted the possibilities they offered. Indeed, we can marvel at the plans of God who “can bend and change and form and re-form any of his creatures to fit them for the purpose he designs”.

Since Foundation Day, more than 55,000 women have professed vows as Sisters of Mercy. At times the congregation grew rapidly. At the height of the surge of women entering religious life in the 20 years after World War 11, more than 15,000 thousand entered Mercy. Today the numbers are fewer but as Mary Sullivan, rsm reminds us that when Catherine McAuley founded the Sisters of Mercy on December 12, 1831, there were only thirteen sisters; two of these died, two left, and two more entered within the next year. From the life, example, and effort of these eleven have come, through the providence of God, the 9710 Sisters of Mercy in the world today. Surely these 9710 are enough to be powerfully “Mercy in the Twenty-First Century.” If they generously welcome into their lives the Spirit’s kindling of the “fire Christ cast on the earth,” they could be this even if they were only eleven.

If Catherine were alive today, she would no doubt be very encouraged by the second wave of Mercy, characterised by the expanding number of Associates, lay Mercy Leaders and co-workers in Mercy who are safeguarding the continuity of her work to those most in need of God’s compassion . Mercy has always been shaped by need and by the courageous response of those willing to allow God to bend and change them, to form and reform them to fit the purpose he designs. The shape and form will no doubt be different in the future.

Sandra Schneiders recently pointed out ‘We will not look today or in the future as we looked in the past – either in our outer appearance, or in age or in numbers, or in lifestyle or in ministry. But we will be what we have been since the first century, disciples called by Christ to commit ourselves totally to him. Lay ministers of Mercy will shape Mercy according to their life form, not imitating a religious life form but bringing their own unique gifts to its shaping .

Catherine’s legacy to the Institute was unity. The dance of collaboration and distinctiveness of religious and lay will generate another but more challenging kind of unity, captured poetically by Khalil Gibran when he cautions ‘And stand together yet not too near together: For the pillars of the temple stand apart, and the oak tree and the cypress grow not in each other’s shadow'.

On this anniversary of the founding of the Sisters of Mercy, why not visit Catherine’s chapel and spend a few moments with her in thanking God for the blessings of the last 180 years.