‘This is our beginning this is our sacred ground.
Gathered together, we have come home’. Susanne Toolan, rsm

The refurbished building which had originally been built and opened in 1827 by Catherine McAuley was formally handed over by the architects, builders and other workers to the care of Mercy International Association on 31 March, 1994.Sr. Mercedes McCarthy, (GB) Archivist had been working since February on preparing the Heritage display and organising the Archives. Sr. Josephine Grey (Irl.) and Ursula Gilbert (Aus) arrived to help with the preparations and to help with the increasing number of visitors arriving at MIC. Between April and the official opening in July, 680 had signed the Visitor’ Book and this was less than half of those who had actually come! The preparations were at fever pitch:

A very special delivery was the sculpture created by Michael Burke. He was also invited to do a larger than life sculpture for the front of the building and this was delivered on the Thursday before the opening.

And then the big day arrived.

The Centre was officially opened by President Mary Robinson. In her address she said:
‘I know that this is a special occasion for Sisters of Mercy throughout the world and I am pleased to have the opportunity on your behalf to open this Mercy International Centre. I would like to take this opportunity, as President of Ireland, to reclaim for Ireland, for our history and our heritage this wonderful woman, Catherine McAuley’.

President Robinson went on to quote Bishop Desmond Williams who wrote of this House of Mercy in contemporary terms as:
-A residence for the homeless,
-A social service centre and
-An employment bureau
before these were concepts about. The Bishop had written about the affirmation of women which Catherine did in two ways, showing love and respect for the poor:

By the response of the Sisters in health care and providing refuge for those who:
Were desperate and by the education of young women – before that was seen as a value.

President Robinson went on to say, ‘We still need that vision and dedication .... It is very special for you to have this centre as:
An imaginative and spiritual connection
A place where Catherine is buried
A place full of the history of the past
A place that is in every sense a Heritage Centre ............
So it gives me great joy and pleasure to join in honouring and venerating the Venerable Catherine McAuley and in officially opening this Centre. Go raibh maith agaibh go leir.’

Sr. Patricia Joseph Corkery, dressed as Catherine herself, presented President Mary Robinson with a miniature bust of Catherine and said that she believed that some of Catherine’s spirit lived in the President.
Then there was the Commissioning of the Mercy International Centre Team:

The team were missioned by Mary Waskowiak rsm,  Chairperson of Mercy International Association, on behalf of the Sisters of Mercy of the world:
‘We entrust to you the ministry of caring for this Mercy International Centre. We invite you to be tenders of the heritage, to receive pilgrims here in simple hospitality, and like Catherine, to be witnesses of the mercy of our God in this place. Through you may we and all parts of our world be transformed by God’s tender mercy.’

All processed then to the garden, singing a hymn composed for the occasion by Suzanne Toolan rsm Burlingame
This is our beginning, this our sacred ground,
Gathered together, we have come home.

Water, symbolising the streams of Mercy from all parts of the world, returning to their source, enriching one another and then moving back out to the ends of the earth was carried by Sisters from many nations. After the singing, the Sisters poured water from their special vessel into the rill, as a symbol of all being united in this sacred place. In the words of Canice Hanrahan rsm ‘containers of waters from around the Mercy world were poured into the rill to mingle irreversibly. It symbolised an enormous step for the entire Mercy family into a new dance still being choreographed by the Spirit'. 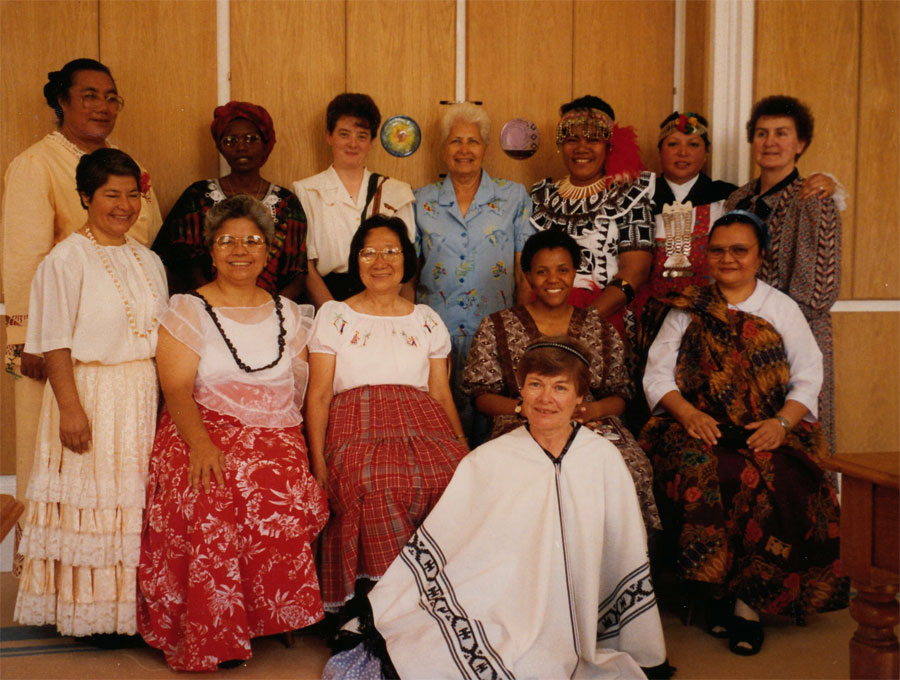 
The desires of each one's heart were captured in the lines composed by Rosaleen Hogan rsm.

When the many strains of Mercy echo here
With tones of near and distant peoples,
May these walls gather us in,
May these windows and doors open us out.
May this be a resting and rising place,
A sharing and a gathering place.
May all within be refreshed and filled
With Catherine’s laughter, love and life.
And may you, O God, with Your Son and Sprit, speak to our hearts.
Then as one voice, well sing with a new and vibrant beat
The wonder of Your Mercy to the world.
Muire, Mother of God, be with us in this place
And show us the face of Christ. Amen.

The celebrations then moved to Westland Row Church (St. Andrews) for the Opening Mass, at which Archbishop Connell was the main celebrant. In the Entrance procession, Sisters from many nations around the world carried their flags proudly, and the Sisters in national dress carried their water vessels. Nearly a thousand people, mostly Sisters of Mercy – from all over the world – packed the Church to standing room. The Mass was one which all those who were present will remember as having been very moving and inspiring – a celebration of joyous, hopeful mercy.

Rosemarie O’Neill rsm gives an eye witness account
‘I was in St. Andrew’s Church, Dublin – Catherine McAuley’s parish! Almost 1,000 people filled the church. Brass was blaring. Camera lights were beaming. The air was electrified with the energy of the event. Women, Sisters of Mercy, in native dress from the nations of Africa, the Pacific Islands and South America joined in celebration with their English –speaking counter parts – our global reality was enfleshed! Sr Canice adds: 'The formal opening was a day of unrestrained excitement, rejoicing and gratitude. The Mass in Westland Row Church was a magnificent celebration'.

In his homily, Father John Fitzpatrick, quoted May, an elderly woman who helped in the sacristy. On seeing the Sisters on Visitation, she remarked ‘They’re the McAuley’s .... They’re very good to their girls’. Fr. Fitzpatrick went on to say:

It was as though each of the visiting Sisters was the foundress: that she brought with her
The freshness of a reformer,
The optimism of a visionary,
The irresistible attraction of one love- driven

Catherine McAuley, with quite extraordinary sensitivity, precisely identified the needs of her time and she accurately caught the mood of society to respond positively. God had given her a special grace and she knew it .... Mother McAuley’s reluctant foundation of a century ago is now just coming into its prime. The two lungs of its its respiratory system, Unity and Mercy, are now fully operational ... Every Order, through its members, reflects the subtle tone and colour of its Founder’s refined insights into the human condition. These insights are exceptional, God given and lasting. Surely, with the grace of God, it was the insights of Catherine McAuley, as preserved and enriched by succeeding generations of Sisters showing big hearts, which first attracted all of you to her Order and formed you in your resolve to persevere ...... There is a sense in which every Mercy Sister is an original Mercy Sister ... In that sense; she too is ‘a McAuley.

And he concluded: If I could, tomorrow morning, meet May, the sacristan, she would surely say to me, ‘Did you see the McAuleys on television last night? I would take delight in saying, No, May, I didn’t; I was there!’

After the Opening Mass, many buses and cars took the crowds to University College, Dublin for a celebratory meal. Sr. Elizabeth McCaver, who was responsible for the Dinner plans, tells us that the numbers had started around 300 but eventually 700 Sisters of Mercy and other guests from many nations sat down to a delicious meal! Thanks to a wonderful manageress and staff everything proceeded wonderfully to everyone’s enjoyment.

On behalf of the Sisters of Mercy of the world, Patricia March rsm (Newfoundland), read an address of appreciation for the great work that Mary Trainer rsm had done in bringing the project to completion.

‘ There is no doubt that there was a "marked Providential guidance" that Sister Mary Trainer was in our midst at this particular time and that she was made most generously available by the Merion Regional Community of Philadelphia .... It was surely God’s Providence that such a gifted, talented woman – a true visionary – was in our midst ......
Mary, as we present you with a small gift as a token of our loving appreciation, we thank you again for sharing your dream: thank you again for the courage you had to follow that dream, and our prayer for you is this: May you take rest and then awaken to new dreams given you.

May the blessing of God’s dream be yours.’