Over sixty people – Sisters, Associates and friends of Mercy travelled to Baggot Street to celebrate Foundation Day. As people were welcomed at the front door, one Sister was heard to exclaim ‘this is what the excitement must have been like when Catherine, Mary Anne and Elizabeth were welcomed back home by their waiting companions on December 12th 1831.

The celebrations started in the International Room at 2p.m. The setting contributed to the sense of the international face of Mercy today, and this was further enhanced by the fact that the hours of 2p.m. to 4p.m. were the designated time for the GMT zone to take its place in the great chain of Mercy prayer surrounding the world on this day.

The prayer service was in three parts – the telling of the Founding story and the spread of Mercy around the world, the re-commitment to Mercy by all present and lastly the praying for an outpouring of Mercy on the peoples of the world today, particularly those most in need.

The prayer space held the beautifully illuminated work of Clare Augustine Moore, showing the entry in the Registry of Catherine, Mary Anne and Elizabeth as well as a depiction of the Object of the Congregation . Catherine’s ring, which she received for the first time on this day, took pride of place and each person had the privilege of holding the ring as they re-newed their commitment. Music and song composed by Teresa Martin, rsm and accompanied by Ailish O’Brien, rsm greatly enhanced the prayer. 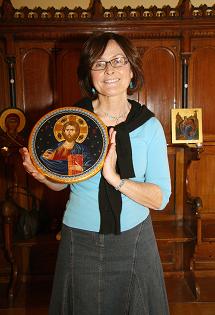 Following the celebration, the gathering was introduced to the very reflective world of Icons and was invited to prayerfully ponder an exhibition of Icons in the chapel. There the subtle colourful glow of candles and the music of the late Sr. Columcille,rsm, beautifully played on the Organ and Violin by Eithne Doyle, rsm and Ailish O’ Brien, rsm led people to deeply contemplate the icons and no doubt to experience that ‘our centre is God’. Many of the icons in the exhibition were written by Sisters of Mercy.

Over refreshments and a good cup of tea in the dining room, Sisters, Associates and Friends gave truth to the statement: Hurrah for foundations! They make the old young and the young merry.

Colette Clarke, who gave a presentation on icons, showing one of the icons she herself wrote.
(Photo courtesy of The Irish Catholic)