Citizens UK and the Exploitation of Workers (GB Union)

Citizens UK describes itself as the hub of community organisation. The web site states that it brings together religious and civic organisations, and groups, to work together for the common good. 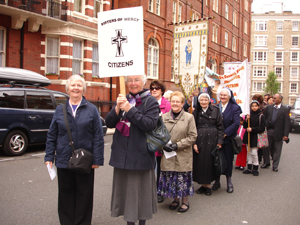 The Common Good was the objective of Catholic Social Teaching long before the establishment of Citizens UK. It is no surprise that members of the Catholic community have been significant in the organisation since the beginning – migrants, care workers, the invisible poor, bishops, parish clergy and professional people.

The year 1996 witnessed both the first assembly of TELCO (the forerunner of Citizens UK) and the publication by the Catholic Bishops of England and Wales of their document: The Common Good and the Catholic Church’s Social Teaching. The two events are indicative of a groundswell of support for the common good.

The Union of the Sister of Mercy is a member of Citizens UK and many Sisters take an active part in its activities. Some have undergone the training to be support persons.
How does it work?

One target was for every worker in the country to earn a living wage—defined as enough to provide their family with the essentials of life. Some employers were paying their key staff well but not their cleaners or catering staff, many of whom were migrant workers. Citizens UK arranged demonstrations outside stores, hotels and government departments all paying less than the living wage to these essential employees. In many cases, including some government departments, the message was heard. Empowering workers helped a cleaner say to a banker “We share the same office” and, in response to the puzzled look, continue “When you go home in the evening, I move in—to clean.” This is a good example of the aim of Citizens UK – to give workers self-confidence. No wonder Boris Johnson, the current Mayor of London, told the Citizens assembly in 2010: “I want to congratulate you on the brilliant way and the ruthless way you bend us politicians to your will and get us to try to deliver.”

In one Citizens UK publications is this statement:
“We challenge people to imagine the change they can accomplish….We set audacious goals, create savvy strategies and take on the powerful interests that stand in the way.”

Our Foundress did the same. Catherine imagined the change that was needed. She set audacious goals where women and girls were concerned and the site of the first House of Mercy, where the wealthy would see it, was a very savvy strategy. Her motivation continues to influence Sisters of Mercy, their Associates and co-workers everywhere; “The poor need help today, not next week!”

The poor we have with us always. What it means to be poor is different in different circumstances. The real test of the moral fibre of a society is how it treats its most vulnerable and its poorest.

Sisters of Mercy, committed to a preferential option for the poor, have found in Citizens UK a worthy ally in their joint search for the Common Good.

“Let us rejoice when good is done, no matter by whom it may be accomplished.” (Catherine McAuley)