After a fantastic beginning to the 2014 Young Mercy Leaders Pilgrimage in Baggot Street Dublin, participants, delegation leaders and organisers were delighted that the second day started off sunny and bright in Dublin! 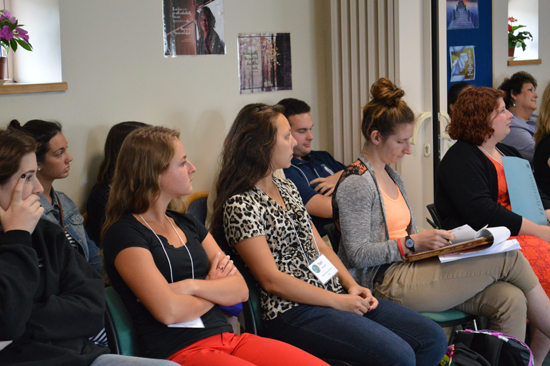 Day two began with registration, after which the participants made their way to the Chapel for the Morning Prayer. Justice, development and peace was the theme of this morning’s ritual, which began with the hymn ‘Bring Forth the Kingdom of God’. Sheila Carney rsm, Delegation Leader from Carlow University, began the Morning Prayer by mentioning the Mercy International Prayer Intention for the Coming Week, which appeared in this week’s E-News. The prayer intention asked that we be conscious of those suffering across our world in war zones and invited us to pray for peace. Sr Sheila asked those gathered to extend this intention and to keep in their thoughts people who are experiencing conflict in their own lives and hearts.

This morning’s liturgy was lead by the students from Carlow University. It opened with a prayer that asked to fill us ‘with the fire of Catherine’s commitment to making the world a better place’. Matthew 5: 13-16 was the scripture reading, after which the pilgrimage candle was lit, seeds were planted into the bowl of earth which was placed in the middle of the chapel, and water was poured from the water fountain onto the seeds. Prayers of intercession were then recited, before the concluding prayer which asked that God ‘bless us in our work as members and supporters of development and peace’.

Spirits were high as the participants moved from the Chapel to the Catherine McAuley Centre for Morning Process. Trish Walsh rsm, who is facilitating this year’s Pilgrimage, asked all present to reflect on what thoughts had stayed with them from their experience of the opening day. Time was given for the pilgrims to journal, after which they broke into smaller group to share their thoughts.

Today’s keynote address was given by Karen Schneider rsm M.D., a practicing paediatrician at Johns Hopkins Children’s Centre in Baltimore. Several times a year Sr Karen travels to developing countries including Haiti, Guyana, Kenya and Peru to care for and help children who do not have access to medical attention.

Sr Karen began her presentation with definitions of Mercy, saying that it was a choice to be merciful. She quoted Jan Eliasson, Deputy Secretary-General of the United Nations, who said that “without passion nothing happens, but without compassion, the wrong things happen”. Examining the theory of compassion, Sr Karen said that everyone must look beyond one’s own needs and wants, and must always look at the bigger picture.

To illustrate, Sr Karen told of her experiences working in Haiti in the aftermath of the 2010 Earthquake. The audience sat enraptured as she told her story of meeting a young boy, who taught her to see the big picture, when he shared a small bit of food that he had been given, with the child in the bed next to him, who in turn shared her food, and so on until there was nothing left. This experience, Sr Karen said, had taught her a life lesson in how to be and how to show compassion. Sr Karen concluded her presentation by inviting the pilgrims to see the big picture and in turn, ‘be the big you!’

Following a short break and time to reflect, Sr Karen answered questions from the group, who were delighted to hear further stories of her time spent working in developing countries. She also explained some of the work that the Sisters of Mercy of the Americas are doing in Haiti at present. Before breaking for lunch, Sr Trish asked the participants to reflect on which parts of Sr Karen’s story had spoken to them the most.

After refreshments and time spent chatting, the pilgrims then moved to their workshops. Throughout the pilgrimage, the participants are divided into groups of 12, and they each attend five different workshops as well as a tour of Catherine’s House. These workshops include the opportunity to discover more about Catherine McAuley; to learn about the work of Mercy International Association at the United Nations; to explore the role of discernment in making life choices; to consider the need for Mercy in today’s world and the way in which we can respond; and to explore the vision and mission of Mercy.

With the day spent reflecting on many big issues, the talent show was a welcome way to relax for the evening. The participants amused and delighted those gathered with some wonderful acts! Carlow University sang the beautiful (and funny!) Songs of Carlow, while Gwynedd Mercy University charmed everyone with a fantastic act called ‘Catherine’s Cup Song’ which included creating a beat with 6 drinking cups, and a song that they had composed especially for the pilgrimage. Delegates from Misericordia University performed ‘An Irish Show’, while Mount Aloysius performed a play entitled ‘Catherine McAuley on Twitter’, much to the delight of the audience!

The day ended with the students, delegate leaders and everyone involved in organising the pilgrimage in high spirits, good form and excited about the coming days!