Death of Sister Who Lovingly Tended the Mercy Story (The Congregation)

Sr. M. Magdalena Frisby died peacefully in the loving care of the Sisters, Matron and Staff in Catherine McAuley House, Beaumont, Dublin on Saturday 14th July 2012, having moved there from Booterstown, Dublin on Monday 28th May 2012. 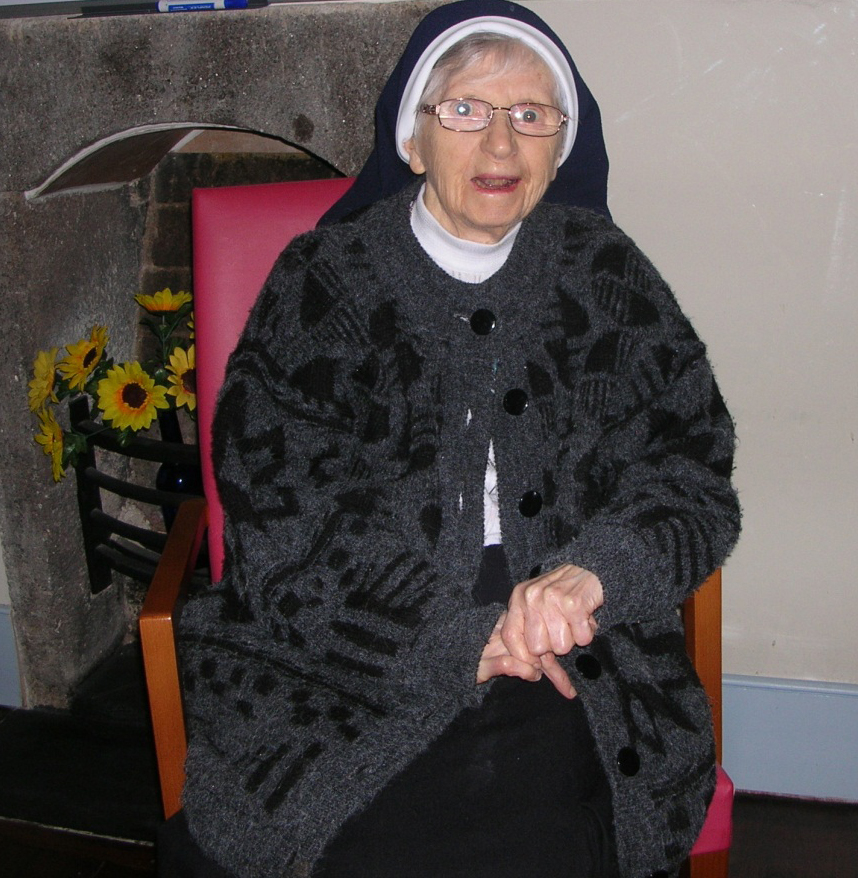 When Mercy International Centre opened in 1994, it inherited precious collections of artefacts associated with Catherine McAuley. These included a large collection of her letters, many items of personal memorabilia, and a number of gifts received by her from supportive friends and benefactors, as well as furniture and other goods which she brought with her to Baggot Street in 1827. In addition,  it inherited an outstanding and beautiful collection of the art and calligraphy work of Sr. Clare Augustine, contemporary of Catherine McAuley, as well as the published drawings of Sr. Clare Agnew, who produced vivid depictions of the early works of Mercy.

Much of these collections owe their wonderful preservation to the loving care of Sr Magdalena.

Today hundreds of pilgrims from around the world visit Baggot Street annually and continue to be nourished and inspired by the collections she so lovingly preserved and tended.

Sr Magdalena was born in Kilamery Co. Kilkenny on 21st January 1916 to William and Catherine Frisby and was christened Margaret Agnes. Her mother, Catherine, who lived for only a short while after her birth, called her Pearl. Her Auntie Minnie took her over the border to Poulacapple in Co. Tipperary where she had a very happy home. However, she remained a proud Kilkenny woman all her life, delighting in the achievements of the Kilkenny hurling team.

She attended the local primary school and secondary boarding school in Carrick on Suir. Because of her visits to the Convent of Mercy in Arklow, she entered there on the 28th August 1935, making her First Profession on 21st August 1938. From 1943 she studied in UCD, while living and doing teaching practice in Carysfort and Baggot Street Convents. On completion of BA and H Dip., Sr. Magdalena taught History, Gaeilge and Latin until her retirement in 1981. She is remembered with great respect and affection by all her past pupils.

She was transferred to Baggot Street Convent, returned to UCD and completed the Archives Course. She lived in Baggot St, St Michael’s Convent Dún Laoghaire and finally in Booterstown, all the while working in the Mercy Archives, now the South Central Provincial Archives. She continued her work full time up to 2002 and on a part time basis up to the last year of her life. Her interest in archives was deep and all embracing, Her archival skills were honed to perfection; her memory was prodigious so that names, places, facts and details remained with her right to the end. Researchers of the Mercy story from all over the world were welcomed by her, first to Baggot Street and then to Booterstown and her gracious hospitality and vast knowledge was deeply appreciated. Her name is to be found in the acknowledgements of many of the works on Catherine McAuley.

It is significant that Sr. Magdalena’s death occurred on the 14th July – the 18th anniversary of the establishment of the Congregation of the Sisters of Mercy.

She enjoyed good health up to the last few months, but losing her sight in these months was a heavy cross especially as she deeply enjoyed reading. She accepted her loss peacefully and with total serenity.

Sr. Magdalena is very sadly missed by her Community, her sister Mai, her cousin John, her nieces, nephews, grandnieces and grandnephews. Her brothers, Michael and Patrick,  predeceased her.

Sr. Magdalena's many friends in the wider Mercy Community mourn her passing. We extend our deepest sympathy to all.