On December 6, 2004 a mural, "For Mercy Has a Human Heart", was dedicated and unveiled in the front entrance of St. Clare's Mercy Hospital. The mural, consisting of six ceramic panels in raku technique and set in a black granite background, is the work of artist, Gerald Squires and his daughter, Esther who worked on the project for two years. The first five panels portray images in the life of St. Clare's over eight decades while the sixth panel encapsulates the whole with the Scripture quote "God's mercy is from generation to generation" outlined in scroll form. The motto of the hospital, Mercy Above All, is written in English and Latin below the panels, as well as the word "Mercy" in the other provincial languages, French, Innu, Innuktut, Micmaq. 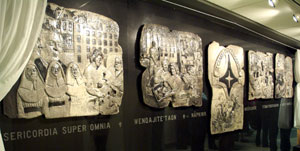 The work, commissioned by the Sisters of Mercy, Newfoundland and Labrador, pays tribute to the thousands of staff and volunteers who have ministered at St. Clare's, including many Sisters of Mercy, a number of whom spent their whole lives caring for the sick and suffering.

In the Ritual of Dedication, three members of St. Clare's Mercy Hospital Advisory Council set the context for the mural, after which Sister Diane Smyth, Manager of Pastoral Care, invoked God's blessing upon all those who continue to work at the hospital. 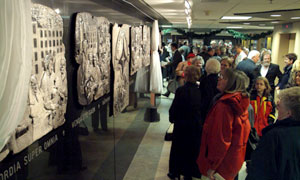 Sister Helen Harding, Congregational Leader, and John Abbott, chairperson of the Health Care Corporation of St. John's, unveiled the mural, after which Mr. Squires addressed the gathering. He noted how pleased he was to be given the opportunity to create this work of art and how he was continuously reminded of William Blake's poem, "Divine Image", from his "Songs of Innocence" throughout the sculpting process and eventually taking a line of this poem as the title of his work. 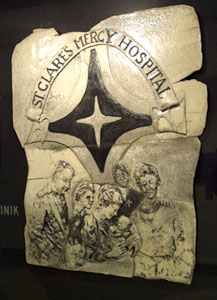 The evening concluded with a reception in the cafeteria of the hospital where many staff, volunteers and invited guests had the chance to meet and converse with Mr. Squires and Esther.