As they celebrate International Earth Day (April 22, 2006), the Sisters of Mercy in Detroit, Michigan are looking forward to the green roof on their retirement home blooming for the first time. In their Direction Statement http://www.sistersofmercy.org/qanda/direction.html, the Sisters of Mercy of the Americas committed themselves to “act in harmony and interdependence with all creation.”

In response to the Mercy Environmental Guidelines http://www.sistersofmercy.org/justice/environment_guidelines.html adopted by the Sisters of Mercy of the Americas in 2001, the sisters in the Regional Community of Detroit decided to conduct an environmental audit of their Farmington Hills, Michigan campus to identify elements that impact the bioregion's air, water, land and all of nature. They formed a Green Energy Team made up of Sisters of Mercy, campus staff, representatives of an environmental consulting firm, and guest members from the City of Farmington Hills and Mercy High School, who share the campus with them. The audit was conducted during 2002-2003, resulting in recommendations that have been gradually implemented ever since. 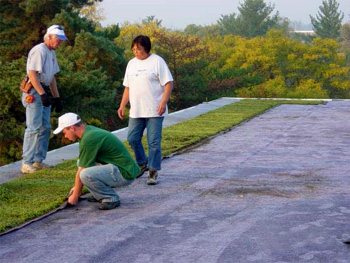 One recommendation was to install a green roof system over part of McAuley Center, home to retired Sisters of Mercy. The roof already needed to be replaced, so once they were sure that the technology and construction of a green roof would serve their needs, the decision was made to proceed. The work was completed in October 2005.

What is a green roof? A green roof is a living, vegetative roofing surface used in addition to the standard non-porous surface of asphalt and concrete, thus replacing the vegetated footprint that was destroyed when the building was constructed. Due to urban development, forests and agricultural lands are being replaced with impervious surfaces, which act much as a biological desert. The necessity to recover green space is becoming increasingly critical for the health of our environment as well as our wellbeing. Vegetated or green roofs are one potential remedy for this problem. Green roofs originated in northern Europe, where sod roofs and walls have been used for hundreds of years. Advances in the technology have led to a renewed interest in recent decades, but green roof installations are still relatively rare in the U.S.

A typical green roof consists of several layers of organic and inorganic materials with the primary purpose of keeping water out of the building space. The top layer consists of a variety of plant materials that require little to no maintenance once established. Subsequent layers are typically a planting substrate of a specialized growing mix, water-retention fleece, drainage mat, root barrier and roofing membrane. 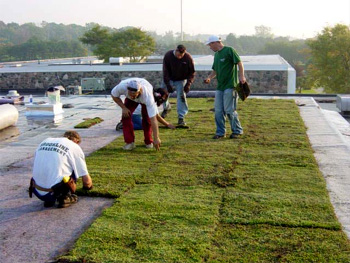 Benefits: The cost of a green roof is greater than that of a traditional roof, however, the Sisters of Mercy chose this option because of their commitment to act in harmony and interdependence with all creation and because of the numerous other benefits: