Effective Communication to Support our Shared Engagement in Mercy Mission

Editor: Effective communication has always supported our engagement in Mercy mission. It is an aspect of our shared inheritance from Catherine McAuley. Her prolific letter writing, her recorded negotiations and her tireless travels to visit the new foundations, established a tradition of supportive communication for each other and with the key decision makers of the day for the sake of the mission.

With the refurbishment and opening of the Mercy International Centre in 1994, MIA faced new challenges to facilitate effective global Mercy communication, expressed in one of the objects of the Memorandum of Association, as a call ‘to increase the Sisters of Mercy awareness and experience of their global interdependence and to promote solidarity amongst Sisters of Mercy’.

In 1998 the first MIA website was developed. Initially the site was a folder on the Australian Mercy Institute website. The international Mercy site enjoyed further development and name changes until www.mercyworld.org was agreed to and the domain name registered on 1 October 1999.

The mercyworld.org website represented the first visual expression of what the Sisters of Mercy looked like as an internationally networked organisation. With the development of this site, Sisters of Mercy were helped to find each other across the globe, learn about each other and draw inspiration from each other. The content on the website assisted all who were part of Mercy life and ministry to continue to draw on Catherine McAuley's legacy in the multiple expressions of ministry response to those in need.

In 2003 at their February meeting in Burlingame the members of MIACOM discussed a new look and structure for the website and planned for it to be launched on Mercy Day. The existing design (above) was two years old and since the site had been developed the interest of the Mercy community in communicating online had grown significantly, helped by the launch of the weekly Mercy E-news in August 2001. Central to the existing website design was the Mercy cross and quote, informing the world that MIA was online and what it stood for. Having clearly established its presence online, MIA was now ready to take a further step in the online space.

The new homepage (below) was designed to emphasise internationality and to enable immediate access to a number of features including the News and the various MIA Projects - Mercy International Centre (MIC), Mercy International Justice Network (MIJN), Mercy Global Action (MGA), Catherine's Canonisation Cause (CCC) and Mercy International Communications (MIACOM), as well as the opportunity for prayer (Sacred Space) and conversation (Conversations, Mercy Chat). 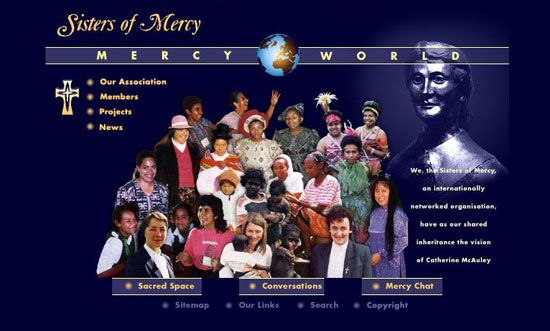 This new site offered the possibilities for Sisters and Associates to submit Mercy news, facts, quotes and details of Mercy resources, all of which (then and since) were moderated before going live. From the beginning, the idea of Sisters contributing to the development of the Mercy community online was encouraged; these new opportunities helped to further expand the global connections and to enable those site visitors who wanted to be more than viewers to be active responders.

In 2005 because of changing realities in member congregations and in the world, MIA recognised the need to refocus its vision. They conducted a Visioning Exercise in Dublin in May 2006 with Mercy leadership teams and leaders of current MIA Projects to discern a way forward for the Association. Following the release of the Visioning Statement, the homepage of the site was redesigned and restructured (see below) to promote the vision and to make it widely accessible in pdf . An extract from the Visioning Statement was used in the header of Mercy E-news until that was redesigned and released in January 2014.

At its August 2007 meeting the Board adopted this Statement of Vision and a new structure to support the vision.

MIA’s vision of ‘Living…Telling…Supporting the Mercy story’ coincided with MIACOM’s vision for fostering new expressions of the Mercy story on the website. At its March 2008 meeting MIACOM recommended a new cycle of website development be undertaken, that Mercy stories and activities be a focus of this development and that a new technical platform be utilised to facilitate engagement by the many and varied audiences. The members of MIACOM - Srs Philomena Bowers (MIA Liaison), Denise Fox, Ethel Bignell and Adele Howard (MIACOM Convenor) - invited Pat McDermott rsm (Americas), Ailish O'Brien rsm (The Congregation) and Anne Walsh to meet with them in Burlingame in October 2008 to address the request from MIA leaders in May 2008 regarding the future of the MIA website. In the interim, MIACOM advised Fraynework to do a small amount of development of the Addressing Global Poverty addition to the site (through the ‘microsite’ on Mercyworld.org) and to continue its routine updating and maintenance on the regular website.

At their Burlingame meeting the participants acknowledged that the audience for whom the existing website was designed had broadened considerably since mercyworld.org was originally built. From the initial internal audience (Sisters of Mercy) for the first web development, many and varied audiences could be identified including Friends of Mercy (adult and youth associates, employees, board members, past pupils, family, colleagues...) Enquirers (including those discerning a vocation, Church organisations), those sharing Mercy values and concerns, such as global poverty, displacement of peoples, trafficking of persons, those encountering the services of the Sisters of Mercy and those desirous of working with Mercy such as potential contractors and employees, the media and the web 'surfer'.

The world had changed, the use of technology had been broadly adopted as a primary means of communication within the Mercy network and it was now the age of Web 2.0, the second generation of the web, whereby the ability for people to collaborate and share information online and to interact with the web was replacing static web pages. 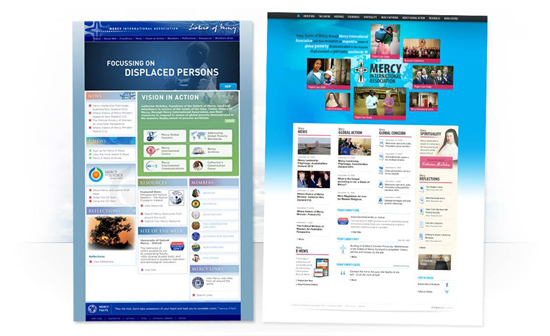 Mercyworld.org. On left the 2007 website with the focus area highlighting MIA's areas of concern. The 2010 site is on the right - designed in a lighter blue, more visually rich and with a focus area that provided a number of different entry points using Flash technology.

To better meet the needs of its many audiences and to take advantage of new understandings and new possibilities with web technologies, it was proposed that the new MIA site would:
be a portal through which to pursue different pathways of information about or engagement with the Sisters of Mercy;
include a search facility across the site to enable the site visitor to access all the online richness of the Mercy world online;
utilise rich media (video, audio, images, interactive features) as well as text to tell the story of Mercy and invite engagement and response;
contain reciprocal links to all Sisters of Mercy related websites worldwide
be the online authorised source of information about Catherine McAuley
facilitate connection and engagement in the vision and mission of the Sisters of Mercy.

A public web 'platform' facilitating access to and expression of many Mercy projects that are in place today to alleviate global poverty, an ever expanding 'library' of Spirituality resources, a members area with web conferencing capabilities along with document sharing and discussion forums to enable conversation and collaboration across the Mercy world ,all utilising a content management system (CMS) enabling authorised website administrators to update and change content throughout the site, were particular highlights of this development. As well,  a new logo for MIA was created and a new branding strategy designed, now used in MIA stationery as well as online.

The new site was launched on 2 August 2010 with a progressive rollout, beginning with the public platform.For the next 9 weeks in Mercy E-news one aspect of the new site was highlighted in an online training programme for all interested in learning about the new site's functionality and capacity for engagement.

Face to face training programmes were conducted by Adele Howard rsm and Anne Walsh in Dublin (May 2010) and in Melbourne (March 2011) for key Mercy communications personnel and for Sisters who were keen to understand the communication potential of this new web platform. 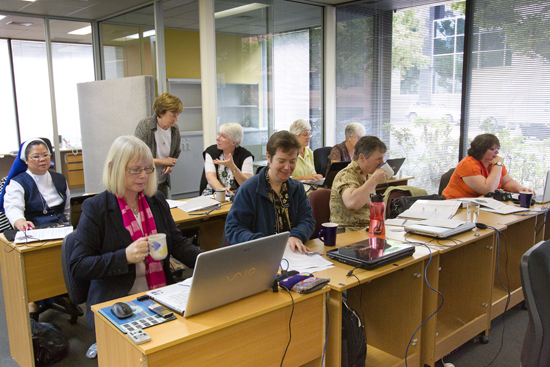 In late 2013, in preparation for the MIA 20th anniversary year, adjustments were made to the homepage of the website, to remove the Flash animation and replace it with a carousel so that images can be changed by the web administrator to feature themes, stories or particular events and link to those stories and experiences.  The focus areas of MIA - Cosmology & Ecojustice and Human Trafficking - and access to archived editions of Mercy E-news have been highlighted with other pathways adjusted to facilitate better access for our website visitors to their intended destinations.

Through ensuring that its web presence is accessible, the design visually pleasing, the navigation intuitive, the technology current and the content informative and engaging, MIA welcomes an increasing number of visitors each year to its 'digital door' at www.mercyworld.org  Since the new site went live in 2010, over 1.5 million unique visitors have come to this website and encountered the vision of MIA and the online expression of its mission. Currently 2000+ unique visitors per day (averaging a million hits each month) 'call in' to this virtual House of Mercy that gives expression to the vision, hopes, aspirations and global outreach of Sisters of Mercy everywhere.

Our challenge is to continue to cater for the needs and interests of our audiences in ways that welcome, inform, educate, involve and inspire our website visitors.

Communicating the Ongoing Story of Mercy
The Establishment Growth and Contribution of MIACOM
How are we to be Together? Our Reflections on MIACOM