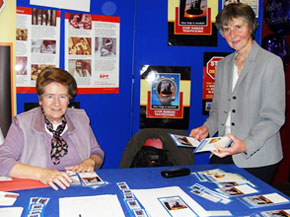 APT is a faith-based group working against Trafficking in Persons (TIP) in Ireland. It is linked to both the Conference of Religious of Ireland (CORI) and the Irish Missionary Union (IMU). Concerned about the growing reality of the worldwide trafficking of women and children for sexual exploitation, we explore ways of working together nationally and internationally to prevent this evil.

On October 18th – European Day against Trafficking APT participated in Open Day at Tallaght IT – a third level college. The focus of the day was on volunteering. The photo shows APT members Mary Ryan RSM and Catherine Dunne RSHM at the APT stand where they with others had a busy and successful day interacting with students, staff and the general public. There was a high level of interest shown in Trafficking and in APT

APT members have worked at a number of levels –
o Befriending and counselling people who have been Trafficked.
o Providing safe homes
o Lobbying the Government to pass appropriate legislation,
o Monitoring the way in which laws are interpreted in the Courts.
o Sponsoring research into the crime and its effect on people who have been subjected to trafficking.
o Raising awareness by speaking to parish, school and other groups, and the media.
o As a faith-based group we pray for the women and girls who are trafficked, and for a change of heart in their traffickers.