Events in Samoa and Tonga

There are seven Sisters of Mercy living and ministering in Samoa. Thank you to those who have sent messages of prayerful support at this time of devastation to the country and lives of so many people.

The Sisters are all well and our houses and schools have not suffered damage. 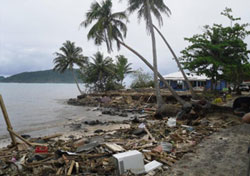 The area that was most damaged was on the south side of the island of Upolu. At least 180 people have been killed and the toll is expected to rise.

After the earthquake the Sisters in Leulumoega (which is on the northern side of Upolu) evacuated the house quickly and moved up the hills behind the school with the students who had already arrived at school. The Sisters in Fusi (on the island of Savaii) evacuated to Logoipulotu Centre, the Catholic Pastoral Centre which is a designated evacuation spot for the island. The hospital patients were also evacuated there also. They were there for approximately four hours before the message came saying it was safe to return. They joined in prayer with the people in the village where we were and helped to keep the children calm.

When people were able to return to their homes the Sisters were heavily involved in transporting all the people who had run to the safety places.

On the evening of the earthquake (Tuesday) some of the Sisters went into the hospital to donate blood as the supplies were desperate. That in itself was an experience! Four of them in a tiny room lying on beds with the bags collecting blood resting on the floor. 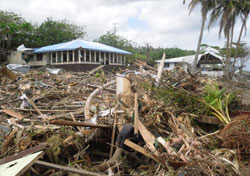 On Wednesday school was cancelled so the Sisters in Upolu went to the disaster area as they were calling for volunteers over the radio. Essentially there was little they could do apart from drop off all the clothes, towels, sheets etc that could be spared from our wardrobes as well as food and water. Destruction is everywhere. Diggers are really needed first and they were still searching for bodies. The people are still in shock so were resistant to any form of clean up. The weeks and months ahead are going to be very difficult. Whole villages have been destroyed. Pictures don’t do justice to the horrific images of people searching for their loved ones, some families have lost over ten members of their extended families as village life in Samoa is closely linked to family life.

The Sisters took clothing, food and a financial donation to the Archbishop’s collection in association with Caritas Samoa. Caritas are developing plans to construct a simple fale (house) for $5000 US dollars.

On Thursday the students returned to school. Because the major damage was a distance away none of our students have lost homes or immediate family members. However, what we know is that because Samoa is so small, everyone seems to know someone who has died. One of the students at St Theresa’s school in Fusi was on the ferry at the time of the disaster. It took an extra three hours than usual before it was able to reach the port. 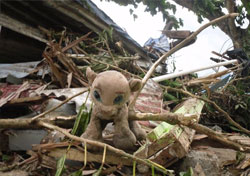 One of the teachers at Paul VI College is a chief of one of the villages that was totally destroyed, although he didn’t live there as he lives closer to school, his family and friends all live there. He told staff that before he left his village at the devastated area on Wednesday night, the men went and got a log to use for the children to rest their heads on to sleep as they had no pillows. On Friday further collections from our schools were taken to the affected area – including all the pillows that could be found! The Sisters continue to seek ways that we can help the victims of this natural disaster.

In Tonga the tsunami hit the outlying island of Niua Toputapu (population 1,600) causing 10 deaths and widespread destruction. Through her role with Caritas Tonga, Sister Senolita Vakata has assisted in providing a counsellor to support the people on this isolated island.

Nga Whaea Atawhai o Aotearoa Sisters of Mercy New Zealand are most appreciative of the messages of concern sent from across the Mercy world in response to events in Samoa and Tonga.

There have been a number of requests as to where to send donations. Thank you for your generosity.

Electronic donations can be made via: 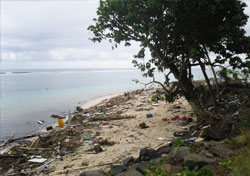 In the particulars section please enter “Tsunami relief’ and, if you wish to direct it specifically, add ‘Samoa’ or ‘Tonga’.

All donations will be forwarded to directly support the local people.