Focus on Haiti: A Response to Catherine’s Call in our Time

As we celebrate the 20th Anniversary of Mercy International Centre and our vibrant Mercy Global Family, we are amazed and awed of how Catherine’s dream continues to flourish through over 7,000 Sisters of Mercy, 5,000 Mercy Associates and more than half a million ministry partners in approximately 45 countries.

Catherine’s dream is very much alive for Focus on Haiti (FOH), a group of Sisters of Mercy, Associates and Mercy friends who have been ministering with the Religious of Jesus and Mary and the people of Gros Morne, Haiti. The dream to bring Mercy to Haiti began as a response to the Sisters of Mercy of the America’s Chapter in 2011 and to the Chapter question:

“God of Mercy, of Wisdom and Mystery, where do we need to be led now to come to both a deeper response to our Critical Concerns and a radical embrace of our identity?”

A group of Sisters present at the Chapter were challenged by this question and call to realize the dream of Catherine through addressing the greatest need in our time. It made sense to all those gathered for the first informal FOH meeting that Catherine would be present in the poorest country in the Western hemisphere –Haiti. 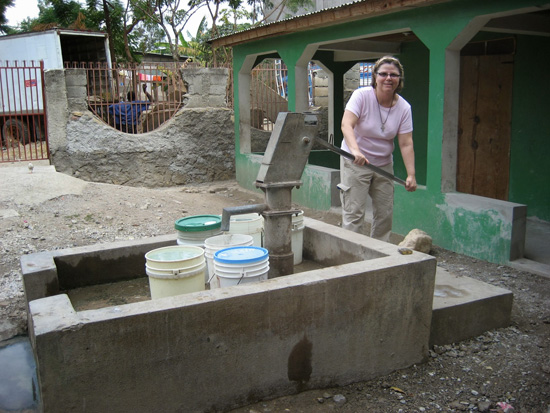 Over the past three years, FOH has been cultivating partnerships with the community of Gros Morne, Haiti and trying through these relationships to make a difference in the lives of the people there.

What does FOH do? At present, we support the Agro-forestry program by providing the salary for the Agronomist and his assistant. One of the practices which devastated the country has been the cutting down of the forests for fuel and cattle grazing areas. Through the Agro-forestry program, the people have received education regarding the impact of this practice and have planted over 100,000 trees on the hills of Gros Morne. The agronomist and his assistant also have oversight for training local Haitians in goat husbandry and a community hen project. Both of these programs along with the reforestation and community gardens have not only provided the community with a sustainable land and food sources but are developing a micro-economy to allow women to have some source of income to lift themselves out of the cycle of poverty. 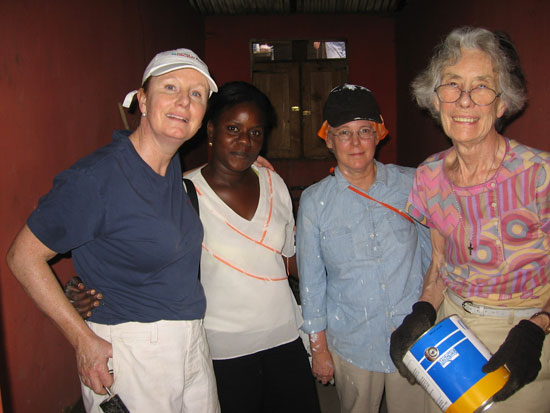 Some of the work crew getting ready for a busy day: Andrea Haely, Maryice (on Staff at Bon Samaritan),  Sr Mary-Paula Cancienne and Sr Mary Sullivan

Another major project of FOH is the support of a facility called Maison Bon Samaritan (House of the Good Samaritan). This facility is home to 23 formerly homeless, vulnerable and sick residents. FOH has been dedicated in making improvements in the physical space and safety of the residence as well as improving the care of this at-risk population of adults. A full time nurse, Lulianne Casimir has been hired and thanks to her efforts and supervision of the staff at Maison Bon Samaritan, the 23 residents have improved health care, access to medications and nutritious meals. We have hosted three volunteer services trips during which we have made improvements in the resident living and communal spaces, kitchen, latrines and aesthetics of the residence as well as built a keyhole garden.

FOH is also in the process of the development of a women’s project which will include components of education, financial literacy and business skills to empower women in Gros Morne. Catherine would be so excited to know her vision for solidarity with women and therefore their children is alive and well in Haiti!

With the expansion of our projects, our organizational structure has grown and now includes an Executive Committee which is comprised of all the chairs of the working committees. These are the Program Planning, Development, Communications and Finance Committees. Geri O’Hare, a Mercy Associate and Pediatric Nurse Practitioner, is this year’s Chair of the Executive Committee and spokesperson for the group.

The Institute Leadership Team serves as the formal body that relates to FOH as an Institute-wide initiative." Sister Eileen Campbell, member of the ILT has become the liaison between FOH and the Institute. This is consonant with FOH since its general membership is comprised of Sisters, Associates and Friends in Mercy representing the majority the Institute Communities and its mission came to birth at the 2011 Chapter!

FOH has engaged a part-time US coordinator to facilitate the collaboration between the partners in Haiti and the US based FOH working committees. Sister Karen Scheer was chosen to fill this role. Karen is a Sister of Mercy and a Family Physician and has been involved with FOH since its inception at the Chapter in 2011. She will also be responsible for supervising the FOH Liaison in Haiti – a staff person who facilitates the FOH mission on the ground in Gros Morne. 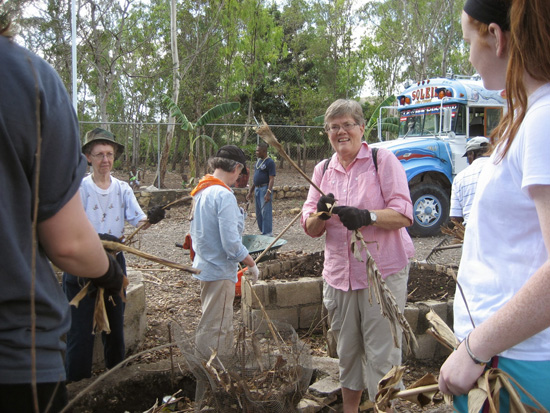 Where do our dreams bring us next? With whom will we be sharing this ongoing vision of Catherine McAuley with? In 2015, two Mercy Schools, Our Lady of Mercy High School in Rochester, NY and Mercyhurst College in Erie, PA will be missioning students to Gros Morne. These young women and men will spend a week in Gros Morne with the Haitian people in service to the community but also to be present with the most vulnerable of our time. They might, as well, experience a little something from our “God of Mercy, of Mystery and of Wisdom,” that will lead them to a deeper place of understanding of their Gospel call and of the Mercy charism in which they have steeped themselves through Mercy education. They too might “catch” Catherine’s vision by participating in the work of FOH and as members of our Global Mercy Community.

If you are interested in more information about the work of Focus on Haiti, or would like to contribute to their work, contact Karen Scheer rsm