Focussing on 25 years of the Institute's mission in Pakistan (Australia)

At the recent sixth Institute Chapter of the Sisters of Mercy of Australia and Papua New Guinea, held in Sydney from September 17-25, 2010, the celebration of Eucharist on the feast of Our Lady of Mercy included an acknowledgment of 25 years of Australian Mercy ministry in Pakistan. 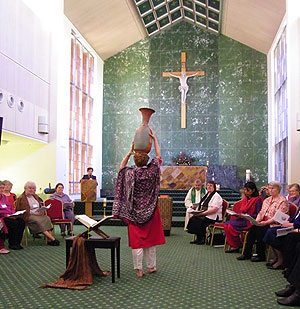 In her welcome address, the Institute President, Nerida Tinkler, said that “it is indeed good that we are here today to honour Mary, the Woman of Mercy whom Catherine chose to be our special patron, and also to acknowledge the sisters who have given life and meaning to the Institute’s mission in Pakistan over its 25 years.” From 1985 until the present, 39 Mercy sisters have lived in Pakistan for a period of 3 consecutive months or longer.

Nerida welcomed the 20 sisters, representative of all who have lived and ministered in Pakistan, who were able to join the Chapter delegates and attend the Eucharist and meal which followed. She also welcome the celebrant, Father Patrick McInerney ssc who, as a Columban missioner, spent many years in Pakistan and more recently had assisted the Institute through membership of the Pakistan Pastoral Planning Transition Group (PPPTG) which was established in 2007.

Nerida recalled something of the story of those 25 years in the following comments.

“After preliminary investigations into what involvement Australian Sisters of Mercy could have in Pakistan, and a few years of discernment, four sisters went to Gujrat, in the Diocese of Rawalpindi, on January 22, 1985. These were Elizabeth Cloonan, Irie Duane, Lexie Brooks and Jean Walton. Later they were joined by Cheryl Camp, Monique Nyland, Maureen Sexton and Brenda Moss. The mission in Gujrat was expressed through the sisters’ ministries in health care, education, community development and administration of a hostel for young women. 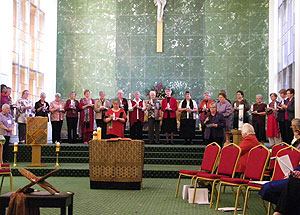 The following year, Win McManus, Abina Looney, Colleen Livermore and Francis Mary Gillies were missioned to Peshawar, also in the Diocese of Rawalpindi. And over the next 15 years, there were others – Flo O’Sullivan, Gaye Lennon, Elizabeth O’Connell, Jean Walton, Patrice Orchard, Carmel McCormick and Mary O’Toole, an Irish Sister of Mercy who first came to Pakistan in 1981. Their ministries included school education, establishing and conducting a women’s centre for literacy and other living skills, family services and prison and hospital visitation.

From time to time, the sisters in Pakistan gathered to reflect on their experiences of ministry and community and it was at one of these gatherings that they identified three emerging issues for ongoing attention. These were: the possibility of beginning a formation programme for Pakistani women interested in Mercy religious life; the need for appropriate governance to enhance the mission; and the desirability of developing a comprehensive teacher education programme for the country.

This last eventually became the highly respected Notre Dame Institute of Education (NDIE). Established in Karachi in 1991, it was, and continues to be, a cooperative venture of the Sisters of Mercy and the Catholic Bishops’ Conference of Pakistan. Arguably, in its 19 years, NDIE, whose students come from all over Pakistan to study for a Bachelor of Education or Master of Education, and are of several different faiths, has been an influential means of contributing to real self-determination of some of the poorest people in Pakistan. Among the fruits of the sisters’ work is that many present staff members of NDIE are in fact its graduates – some of whom have already assumed leadership roles in the college. 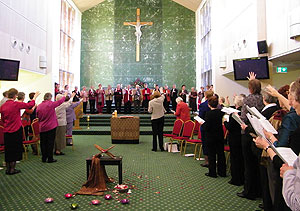 The sisters who have been central to NDIE since its inception are its three directors, Gabrielle Jennings (RIP), Annette Schneider and Margaret Madden, as well as those who lectured and assisted with administration - Bernadette Marks and Catharine Ahern, both of whom were Deputy Directors of NDIE, Carmel Carroll, Jan Geason, Cynthia Griffin, Cathy Solano and Ann Thomson. Over the years too, a number of sisters have spent shorter periods in Karachi in supportive capacities – Patricia Fitzgibbon, Loyola Crowe, Anne O’Regan and Carmel Martin. And of course, there have been many other ‘comings and goings’.

Another fruit of the work of NDIE and the presence of our sisters there is the support of several small learning centres for children. Known as busti schools, these are in the most deprived areas of Karachi.

In 1994, Win McManus began the Mercy mission in Rawalpindi. In 1995 Win was joined by Eileen Ann Daffy who was appointed principal of St Mary’s Academy in Lalazar. She was assisted by Elizabeth O’Connell who took on responsibility for the primary section of the school, and Carmel McCormick. Mary Lewis later came onto the staff as a teacher-mentor. In 2000, Gaye Lennon moved to Rawalpindi to be principal of St Joseph’s school. Audette Mansour also spent a brief period in Rawalpindi in 2006 discerning a possible longer term placement. 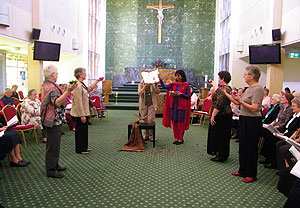 Regarding the possibility of commencing a formation programme, on December 12, 1998, this actually was realised when Gulnaz Alfred joined the enquiry stage, with Patrice Orchard as Formation Director. A second enquirer, Anila Isaac, joined the programme in 2001. Gulnaz was professed in 2003 and Anila in 2004. Gulnaz eventually returned to her family in 2008. We are delighted that Anila, who now lives and ministers in Melbourne, is here with us and that in our Mass we will be praying the Suscipe which she translated into Urdu. The CD version we are using is sung by Gulnaz, so in a lovely way, she too is with us.

For a few years the formation programme was quite active with several enquirers however, as our presence in Pakistan became more tenuous, it closed in 2007. We recall with gratitude the work of Patrice, Kathy Ryan, Kaye Evans and Beverley Whitton who held responsibility for formation at different times.

Following the Institute Plenary Council’s decision to begin withdrawal from Pakistan, it was necessary to coordinate the sensitive tasks associated with this in Rawalpindi. Over about 18 months, responsibility for this was carried by Moira Truelson who had replaced Patrice as the local leader in 2007.

At this point I want to pause as we honour the memory of the five sisters of the Pakistan mission who have died: Abina Looney, Lexie Brooks, Gabrielle Jennings, Elizabeth Cloonan and Win McManus. May they rest in peace.

In conclusion I must acknowledge with deep gratitude the Melbourne Congregation, particularly its leaders who, over these 25 years, have carried the complex responsibilities related to being the ‘authorising congregation’ for this special Institute project. Their wisdom, steadfastness and generosity have been outstanding.

So as we celebrate Mary, our Mother of Mercy in this Eucharist, let us also celebrate the lives and ministries of these fine sisters, and let us remember with great care, the people of Pakistan who welcomed them and taught them so much.”

Within the liturgy, a special ritual after Communion included the calling forth of each sister to receive a 25th anniversary candle and blessing scroll in honour of the occasion. Each candle was lit from the original candle which accompanied the first group of sisters to arrive in Pakistan. The song of blessing sung by the delegates was a moving acknowledgement of the contribution made by each sister over the 25 years.

During the celebratory meal, Nerida read an email containing greetings from Mary O’Toole, a member of the Carlow community in Ireland. Mary wrote as follows: 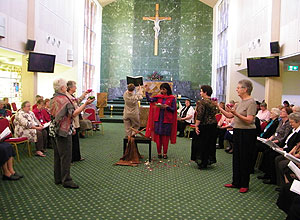 “Fond greetings and congratulations to all as you celebrate 25 years of the labour of love in that beautiful vineyard called Pakistan. How kind of you to remember me! My whole heart is with you today, full of precious memories. In my mind’s eye I can see all the dear faces of those with whom I lived and worked or briefly met there. You know who you are but you may not know what an inspiration you were to me during those years, first of all in accepting me into the Mercy fold and after that, your unfailing strength and example.

I arrived in Multan in January 1981, to a Dominican community of Italian, Indian and Punjabi sisters. Then came the glorious moment in 1985 when a whole community of Mercies from Australia landed in that very needy country – Gabrielle, Elizabeth, Jean and Irie; and after them, the whole procession of others. My heart leaped when Gabrielle invited me to join them but I was committed to Multan, so it was not until 1995 that I joined the Mercy community in Peshawar and felt ‘at home’ again…”

Symbolized in a pair of decorative wooden shoes placed near the anniversary cake, Nerida also recalled the many journeys made by Win McManus in Pakistan. Win had sent an apology for the gathering and died two weeks before Mercy day.

During the formal part of the celebration, a toast to the sisters involved in the Pakistan mission was proposed by Patricia Fox, previous President of the Institute and Convenor of the PPPTG, and the anniversary cake was cut by Irie Duane and Jean Walton, members of the founding group of sisters to arrive in Gujrat. Patrice Orchard, as the longest serving leader in Pakistan, responded on behalf of the sisters.

Many memories were shared on that day, recalling the joys and sorrows, the successes and frustrations, the excitement and fear, the insights gained from the Pakistani people with whom we have lived and worked during the 25 years. The group was mindful of the two sisters remaining in Karachi, Margaret Madden and Ann Thompson, and of the trauma being experienced by the Pakistani people as a result of the dreadful floods and continued civil unrest. Perhaps the final prayer of the Eucharist captured the celebration as each sister reflected on her Mercy journey:

“God who sends the sparks of life,
who lights the inner blaze of mercy and justice and tends the flame of love,
enkindle within us the spirit of love as we walk our journey.
We ask this in Jesus’ name. AMEN.”

(Compiled by Annette Schneider, with the assistance of Nerida Tinkler and Mary O’Toole.)