From Working Separately to Working Together – MIA Work-for-Justice #1

In the early 1990s the Steering Committee tasked with developing the vision and dream, which led to the creation of Mercy International Association (MIA), knew it had to be a catalyst to increase global awareness. Equally they knew this would only happen if each Sister was able to surrender national priorities and cultural biases, to stand in solidarity with the Mercy Family throughout the world.

Underpinning this hope was a call to justice: ‘To birth a future where, in the spirit of Catherine, we can be globally interconnected and where we can connect the rich and the poor, for the life of the world.’
This was the embryonic call to the Mercy ministry of justice worldwide. To be effective in promoting global inter-relationships and address environmental concerns necessitated a collective rather than a single unit approach. Working collectively would ensure that the Mercy Family maximised the potential of shared corporate resources and their influence across the globe.

In July 1994 the Mercy International Centre (MIC) opened and within two years the work of Mercy International Justice had commenced. At the AGM in 1996 the Justice Coordinating Team of the Institute Sisters of Mercy of the Americas, proposed a meeting of Justice Coordinators from around the world, citing the need to:
1. Explore ways to work together, in the pressing global issues of the day
2. Build linkages across countries and continents to proclaim our commitment to global solidarity and social justice.
3. Promote global inter-dependence as Sisters of Mercy.

The AGM endorsed this proposal, which led to the first International Conference of Justice Coordinators at MIC in June 1996. Arising out of this successful conference was a clear, common focus for the Mercy global justice programme. To facilitate working collaboratively it was agreed to develop a networking resource system, based around a series of continental nodes. This network was named the Mercy International Justice Network (MIJN). 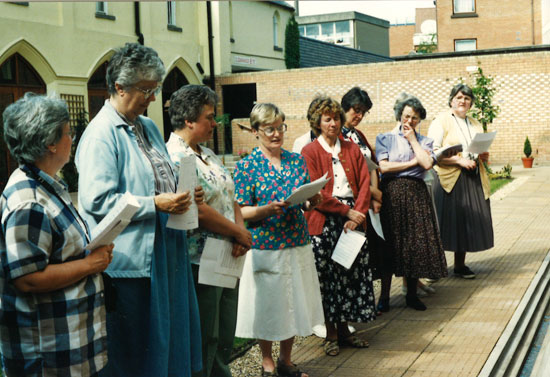 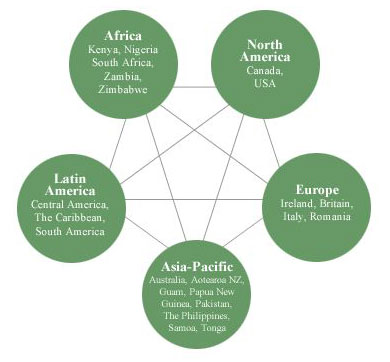 Eventually five continental nodes were agreed: Europe, Africa, Asia- Pacific, North America and Latin America and the Caribbean. It was a deliberate decision that the nodes did not reflect the canonical groupings within MIA. This was to emphasise the rich, international and multicultural reality within the new Mercy structure of MIA. A focal point person was identified in each continental node to network with the Core Group and other focal point persons.

An important step in developing this new global justice programme was the choice of the first two foci, one was the ‘Jubilee 2000 Campaign’, focussing on debt relief; the other was ‘Transnational Corporations’. These were particularly appropriate as both issues entailed developing connections around the world, which MIJN was able to link into. This was evident in MIJN participation in the international citizens’ movement, to block the adoption by the OECD countries, of the Multilateral Agreement on investment.

In September 2001, the second Mercy International Justice Conference was held in South Africa. The successful development of the MIJN to that point was evident in the Conference statement:
‘Our rich heritage as Sisters of Mercy centred in Jesus Christ impels us, as Mercy International Justice Network, to use our collective resources to reach out, embrace and be embraced by a suffering world, so that all may have life to the full.’
Additionally, the conference comprising Mercy Sisters from the five continental nodes, committed themselves to work together to achieve the following:

It was agreed at the conference that the analysis, solidarity and action would be focussed on two urgent justice issues:
1. All forms of violence against women and children;
2. Racism in all its manifestations

Whilst working on these issues at the nodal level, a new dimension to the MIJN work was introduced. This was that in their work on these critically important justice issues, some Sisters made connections with the United Nations……