'Giving because I've been given so much' (Americas)

Editor: In 2011 and again in 2013, Mercy secondary school students from across the globe travelled to Mercy International Centre to experience together some of the richness of the Mercy story through the Young Mercy Leaders (YML) programme.

One of the  keynote speakers at each conference has subsequently been invited by the Australian School contingent to visit their schools in Victoria and Western Australia to share her own Mercy story more broadly. In 2012 Marilyn Lacey rsm (Americas) was the invitee. This year's invited speaker is Karen Schneider rsm MD (Americas) who, in addition to her work in Pediatric medicine at Johns Hopkins Hospital in Baltimore, Washington, takes medical students each year on two to four week trips abroad to treat children with medical needs whose conditions would otherwise go untreated. 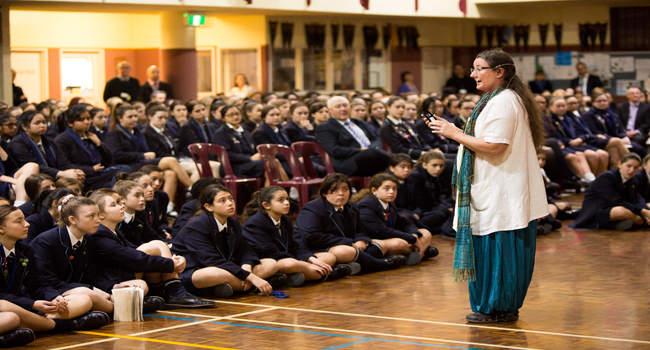 Prior to becoming a medical doctor Sr Karen was a Maths teacher for eight years in a secondary school in Brooklyn, New York. Her teaching skills and experience were very evident in the structure, content and delivery of her presentation to what was clearly a captivated audience at Academy of Mary Immaculate, Fitzroy and, by all reports, the other Mercy secondary schools Karen visited while in Victoria and Western Australia in late May and early June. That presentation took students and staff on a visit to the places where she travels with her medical students: Guyana, Haiti, Kenya and for the first time in 2013, to Nigeria.

As a result of Karen's story-telling, the Academy community not only encountered the children by name, but learned about the geography and cultures of these parts of the world where poverty, isolation and lack of medical personnel and services mean that medical conditions — so easily treated in first world countries— would go unchecked if not for medical teams like the ones she leads each year.

Karen always had a desire to enter medical school and did so when she was given the opportunity for further study after making her final vows as a Sister of Mercy. She returned to college, undertook the necessary prerequisite courses for Medicine (two years), then four years med school, three years pediatrics at Yale followed by three years Pediatric Emergency Medicine and Trauma at Johns Hopkins Hospital in Baltimore - 10 years of medical training. Karen has been in medicine for 20 years and in religious life ('community' as she calls it) for 31 years.

It was in her fourth year of Medical School that Karen first visited Guyana for two months and found herself — with only the 'training' gained in a two-hour medical lecture— treating villagers in the grips of a malaria epidemic. She was to return eventually in response to an invitation from Sheila Walsh rsm then CEO of Mercy Hospital in Guyana who wanted to do outreach to the Amer-Indians who needed medical help but her medical staff wouldn't go into the interior. Remarkably, at almost the same time, a surgical intensive care nurse called Hope who had worked at Johns Hopkins for 20 years but was not known to Karen, and who was now working in the Peace Corps as a volunteer with the Amer-Indians, contacted Karen for assistance. Initially Hope became the access point for Karen to the children in need of surgery, but by the time Hope left Guyana two years later, Karen was known and trusted by the locals as the 'white lady Doctor'. For more than 10 years now Karen has been travelling to Guyana, medical team in tow.

Pediatric training takes three years. First year students (Interns) take a full course of set subjects on rotation. In their second and third year students (Residents) need to take an elective course. One of the options at Johns Hopkins is Pediatric Tropical Medicine - the opportunity to join one of Karen's field trips to communities in need.There are 4 trips each year. Students nominate their preferred trip.

Somewhere between 10-25 medical personnel make a trip. The length of trip —two to four weeks —depends on the distance. 'The number who travel depends on what the country can handle. For example, in Guyana 10-12 people can fit on a boat so that's the limit,' said Karen.

'I try to go to the same places. That's the best way - continuity, follow up, being able to check up on surgeries,' continued Karen.

Asked what drives her, Karen responded with a most moving story of examining and treating a very ill toddler during a trip to Kenya. 'He was unconscious and burning up, dehydrated, vomiting, ill with malaria and pneumonia,' said Karen who explained to the mother how to care for her child with the medicines Karen provided. 'And then the mother bends down to put the baby on her back and the next thing I know is I feel wetness on my toes— I'm wearing sandals— and I look down and there is the mother, on the ground, kissing my feet. And I grab her hands and I sit her up again (on the low stool where she had been seated during the child's examination). Our knees are touching — this is how close we are— and she is crying. I ask the interpreter "What is happening?" I'm thinking, what did I do? Why is she crying? The interpreter starts talking to her and then explains to me: "A few days ago her 4 month old died. The baby had fever and then died. And she was so happy that she had something (medicine) so that maybe this 18 month old will live."'

'So what keeps me going? That's it. It's that kind of thanks. When you realise you are reaching out to someone who has nothing and is so worried about the life of their child.'

'Now I don't know if that child lived or died but at least it gave the mother hope and she now had some things (medicines) she could use as a mother to help that baby. And mothers are the same, all over the world. Whether they live in a mansion or a hut, a mother is a mother.' 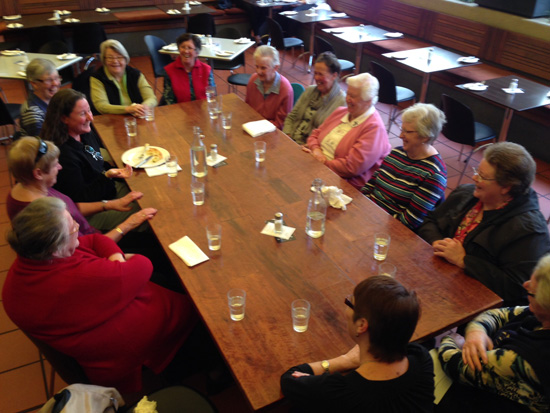 Sisters Together: Karen Schneider rsm (2nd from top left) with Sisters of Mercy from Community C
(ISMAPNG) at a 'Pop -up' lunch in Melbourne.   Photo Adele Howard rsm

'I'm sustained by my Sisters, my community. I'm not the only one doing this. I might be the only one in the jungle at that time but there's a whole community supporting me, raising the money, cheering me on. So I think it's the love of the Sisters. We live together and come together to give us strength to go out and do what we have to do. And at the end of the day, despite exhaustion, we go back out again.'

'And it's my relationship to God. There's such a loving relationship there. From that comes my wanting to give because I've been given so much.'

The 2014 Young Mercy Leaders' Pilgrimage for University students and young adults will run from Tuesday, 5 August to Friday, 8 August 2014. Group registrations are welcome up to Good Friday, 18 April 2014. Individuals can register through June 2014.

In 2015, the Young Mercy Leaders' Pilgrimage for Secondary School Students will run from Tuesday 14 July to Friday, 17 July 2015. Group pre-registrations are now open!