Trafficking is an issue which engages the Sisters of Mercy in Argentina. One example of trafficking into the country is the story of a young Aymara woman, Aida, who was brought by the police to the Sisters of Mercy refuge for women in Moreno, Buenos Aires, Argentina. Aida comes from a remote and very poor village in Bolivia. She responded to an offer by relatives in Buenos Aires to come and work for them. She left her village (much against her mother's intuitions) and crossed the border without documents. She was met and taken to a kind of compound- sweat shop situation where she was locked in, forced to do all the domestic work for the family and workers. She was frequently beaten and raped. Somehow she managed to escape and the Women{s Police Division in Buenos Aires brought her to the refuge. She was pregnant and very afraid. There was no easy way to contact her family and without documents, she could not just be sent back. Sister Cristina Mira and the staff of the refuge managed to make contact with an evangelical radio starion that her family listens to. Arrangements were made with the Bolivian embassy and she was able to return to her village. 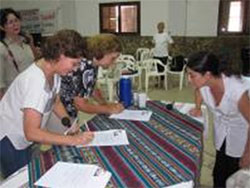 This is one example of how the Sisters are able to give practical assistance to a trafficked woman. However, the sisters also engage in the issue at the political level. They are involved in advocacy and lobbying to end trafficking. The sisters were part of a group of over 150 people in the small border city of Clorinda, Formosa, Argentina, who signed a declaration this spring promising to combat the trafficking of persons. The action concluded a workshop sponsored by various organizations including the Sisters of Mercy and Ñande Roga Guazú, the women and children’s centre sponsored by the Sisters in a poor barrio of Clorinda.

Martha Pelloni, a Carmelite Sister and iconic figure in the fight against violence and corruption, presented the two-day workshop with her colleague Wanda Candal. Members of law-enforcement, judicial, child protection and other government agencies participated along with a number of non-governmental organizations and private persons, including a large group of college students. Themes of trafficking of persons and the related problems of violence, corruption, and addictions were presented.

The city of Clorinda sits on the trafficking route connecting its poorer neighbour Paraguay with Buenos Aires and points beyond both in Argentina and internationally. Mercy Sister Estela Gomez and others concerned about the growing problem decided to take action. Somewhat naively, Estela and two others prepared posters and fliers and went to two border crossing sites to distribute them. The reaction of immigration officials was less than friendly. And the posters immediately disappeared. However, many others they met –taxi drivers, stevedores, money changers, etc.—were eager to share what they experience on a daily basis.

Estela would comment later: “I felt like a little rabbit in the midst of wild beasts. It was suddenly so clear that the trafficking of one young woman takes place within a system of organized corruption.” 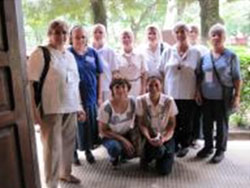 The small group of concerned persons continued to gather and to strategize. Estela and I crossed over to Asunción, Paraguay, to consult with the municipal agency handling problems of trafficking. Two staff members later journeyed to Clorinda to be part of an initial consciousness raising day in which 70 people participated. An Argentine documentary entitled “Nina” was viewed. It recounts the terrible journey of two young girls who are trafficked from the area around the Paraguay-Argentine border. The film depicts well the socio-economic situation of the women which causes them to be so vulnerable. It also presents the complexity and corruption of the process of ensnaring and transporting these women.

Subsequently, the longer workshop with Sister Martha Pelloni and her non-governmental organization Infancia Robada (Stolen Childhood), resulted in the formation of a network and a Clorinda-Formosa chapter of the NGO. Unfortunately in the face of strong criticism with regard to government inaction, agencies withdrew for political reasons.