The Sisters of Mercy of the Union of Great Britain has sisters working in England, Wales and Scotland. There are also members of this community who live and work in South Africa, Lebanon and Romania.

In the words of their General Chapter 2005 Sisters of Mercy of the Union restated their commitment: ‘...as a Congregation to be ‘mercy to all’ with preferential option for the most vulnerable in society.’

(Sisters of Mercy of the Union of Great Britain, 2010)

An example of the Sisters of Mercy of the Union living this commitment is seen in the ministry of the Providence Row Homeless Centre in East London. 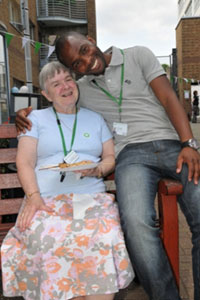 Sisters Bernadette Glynn rsm (pictured at left) and Winefride Biddle rsm are volunteers at Providence Row Homeless Centre in East London. Providence Row Charity was founded in 1860 in the City of London by Monsignor Daniel Gilbert, a young Catholic priest. He was determined that the charity should help anyone regardless of their religion, and with this in mind he asked the Sisters of Mercy to help him establish the first non-sectarian shelter for the poor in London. The Charity works in partnership with the Sisters of Mercy and Providence Row Housing Association to provide emergency help and long-term support for the homeless. Today the work remains true to its Christian values and everyone is helped regardless of their beliefs. Many of the people are homeless; some suffer from depression and loneliness; many have been in care; some have served in the armed forces; and all are vulnerable. Providence Row strives to improve the lives of some of the most vulnerable and impoverished in society.

Dellow Centre and Satellite Centre offer day centre services across two sites. Night Service offers short term overnight accommodation. Besides a hearty breakfast and a shower, clients can get advice and support in a range of areas, including substance misuse, mental health, housing and benefits. The centre has a range of meaningful activities to help people focus on themselves and the world around them. At the Centres clients can volunteer to be involved in running the centre or producing a centre newsletter. They can attend workshops to assist them get back into employment and learn valuable skills such as IT, bicycle mechanics, film making, Theatre and Performing arts and sports.