Greetings and Addresses on behalf of Governments 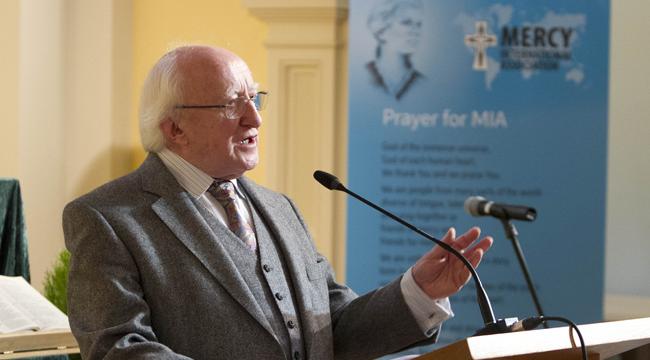 Ambassadors, distinguished guests, missionaries, ladies and gentlemen, it gives me great pleasure to join you here today to mark the 20th anniversary celebrations of the Mercy International Association. I would like to extend a particular welcome to those who have travelled from so many parts of the world to attend this important event here in
Catherine House.

Thank you, nice to be here, on behalf of our Charge d’Affaires Stuart Dwyer, thank you for your invitation to be here.

There’s no doubt that the Sisters of Mercy have had an impact all over the world, and I’d like to tell you a little about what they’ve done in my country, the United States.

We extend congratulations on the 20th anniversary of the founding of the Mercy International Centre in Dublin.
Over the years your organization has accomplished a tremendous amount of work helping communities and touching the lives of people around the world.
The centre is an inspiration to many.
We commend you on the works over the last 20 years, and we wish you well with future endeavours.
I also want to take the opportunity to compliment the organizers of today’s event. The anniversary celebration is the result of the hard work and vision of many people.
I am sorry I was not able to attend personally, but I send greetings to all of you.

Firstly may I apologise to all concerned for my absence as I am abroad at this time and deeply regret missing this important day in the history of the Sisters of Mercy.

The Sisters from this foundation became an autonomous congregation, namely the Religious Sisters of Mercy, Tacloban Philippines, in 1981. They now have 47 Filipino members, all of whom live and minister in the Philippines, providing care and comfort to all as needed.

A second foundation was established in the Philippines in 1957 when four Sisters of Mercy from Buffalo, New York, USA, went to Tubod, Lanao del Norte on the island of Mindanao (the southernmost of the three island regions). The Sisters from this foundation belong to the Institute of the Sisters of Mercy of the Americas, NYPPaW Community (New York, Pennsylvania, and Pacific West Community). There are 42 NYPPaW members living and ministering in the Philippines.

We are all aware that one of the largest ever recorded typhoons crossed the Philippines almost one year ago, the devastation was almost beyond comprehension. The Sisters in Tacloban were significantly affected by this typhoon. The new Mother of Mercy hospital at Tacloban was 50% damaged, the Holy Infant school and college 75% damaged, the Convent in Mindanao badly damaged and food supplies were extremely scarce.

Despite being personally affected by this typhoon in the midst of this disaster, the Sisters of Mercy continued to provide much needed aide, shelter, social and pastoral care to those who needed it the most.

It is with great honour and humility that I as Honorary Consul to the Republic of the Philippines in Ireland sincerely congratulate the Mercy International Association on the anniversary of their amazing 20years of giving to the many thousands of Filipinos they have helped over that period and on their behalf may I offer a profound thank you and a genuine, sincere appreciation for the amazing sacrifices endured to have achieved so much over the last 20 years.

I very much regret that I cannot attend the Mercy Around the World meeting.

May I take the opportunity to wish you, the Sisters and visitors a successful and productive day.

In particular I would like to send greetings and appreciation to your Sisters of the New Zealand congregation.

The arrival of Sisters from Ireland in 1850 was one of the first links between Ireland and New Zealand and which endures and thrives up to the present day.

The contribution the Sisters of Mercy have made in education, healthcare, childcare and social programmes are recognised by Government and the wider society in New Zealand.

I recall during the last visit of the All Blacks to Ireland, a legendary AB chatting "respectfully" over a cup of tea with the Sister who had taught him in Auckland. He was just one of the many New Zealanders who gratefully acknowledge the contribution the Sisters of Mercy have made to life and society.

From: The British Ambassador to Ireland

Thank you very much for the opportunity to express the admiration of the British government and people to Mercy International, as you celebrate your 20th Anniversary. Mercy international does wonderfully good work in so many countries around the world, including Britain.

Indeed, the Great Britain Union, which marks the 175th anniversary of the foundation of Mercy in Bermondsey, London, was the very first mission of the Mercy Sisters beyond Irish shores. We are very proud of the fact - and grateful - that when you first ventured overseas, you came to Britain.

At the State Banquet in St. George’s Hall, Windsor, during the state visit of the President of Ireland, Michael D. Higgins, in April this year, Her Majesty The Queen said: “Britain has been hugely enriched by the migration of Irishmen and women to these shores.”

That sentiment very much embraces the likes of Catherine McCauley and the Sisters of Mercy: today, we are glad to recognise the remarkable contribution that the Mercy Sisters have made to alleviate the lot of the poor and marginalised in our society.

Catherine McCauley’s work has inspired generations of followers. She was appalled by the severe poverty she saw around her. Their dire situation spurred her into action. Her hospitality to strangers led her to establish a new kind of order, asking those who followed her to lead a life of ministering to the poor and dispossessed, a far cry from fashionable society or indeed the enclosed convent orders of her time.

In Britain, convents of Mercy were first established in London and Birmingham. Now there are Sisters living and ministering in 56 locations, reaching out to towns and cities across the UK. Britain, like many countries, has benefited hugely from the network of schools, hospitals and social services established by the order across the world.

On behalf of the British people and government, therefore, I offer our collective, heartfelt gratitude for your past service and for the service you continue to provide in your mission in Britain and throughout the world. I wish this conference every success.

His Excellency Dominick Chilcott,
The British Ambassador to Ireland

MERCY AROUND THE WORLD

Thank you for inviting me today to help celebrate Mercy Around the World. I would like to thank Sister Mary Reynolds, Executive Director of the Mercy International Association (MIA), for inviting me to speak today.

Since being established by Sister Catherine McAuley in 1831, the congregation has grown and generations of Mercy sisters have dedicated their lives to caring for the poor and the sick.

They have created a legacy which we here today to celebrate on this 20th Anniversary of the Mercy International Centre, which has linked the international engagement of the Mercy orders and institutes around the world, including through the UN and other international organisations.

I am here because the good work of the Mercy Sisters was not limited to Ireland...

Download the text of the remarks by Dr Ruth Adler, Australian Ambassador to Ireland (PDF)