An investigation by the Guardian newspaper has revealed horrendous conditions for workers in the Thai fishing industry including 20-hour shifts, regular beatings, torture and execution-style killings.1 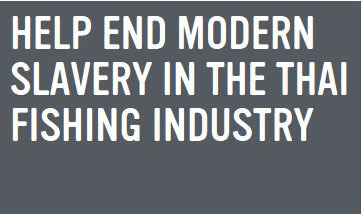 Four big global retailers -- Walmart, Tesco, Costco and Carrefour -- were all named as customers of a seafood supplier in Thailand with proven links to slavery through prawn feed.

Tesco led the way by agreeing to join Project Issara,2 an initiative designed to audit and control slavery in supply chains, as a first step to eliminating slavery from their seafood.
And we’ve recently heard that Walmart has stepped up to do the same.

Help show Costco and Carrefour that they haven’t been forgotten. Another big push now, as their top competitors are making progress on this issue, could get these companies to commit to eliminate slavery from their seafood.

Can you help end modern slavery in the Thai fishing industry by sending a message to Costco and Carrefour?

A huge number of messages now will send a strong message to Costco and Carrefour that their lack of action is unacceptable. Now is the time for these companies to enforce their supplier standards prohibiting forced labour in Thailand.3

Click now to call on Costco and Carrefour to help end slavery in the Thai fishing industry.