'My heart dies a hundred deaths. What have I done to my family?'

These anguished words of Ali still resonate deeply within me and bring tears yet again even though months have passed since I sat with him. Our tears welled up and slipped down our faces as his story unfolded, a story which tragically mirrored the lives of thousands of other asylum seekers.

As a volunteer with the Jesuit Refugee Service I had previously served as a pastoral worker to asylum seekers detained in Curtin Detention Centre, Western Australia. Yet nothing had quite prepared me for Christmas Island, a small island situated in the Indian Ocean, approximately 2,600km north-west of mainland Australia, and 500km south of Java, Indonesia. I’d been gently guided by Mercy Sisters Valda Dickinson, Rita Hassett,  Joan Kelleher and Dorothy Bayliss, RSC, all of whom were experienced pastoral workers, yet the plight of Ali and hundreds of other asylum seekers on Christmas Island shook me.

Like Ali, these desperate people had taken a dangerous journey in the hope of having their claims for refugee status processed and shelter and protection from the terrors of their homelands granted. However, after their arrival, they had been informed that, even if found to be refugees, they would never be settled in Australia as they had arrived by boat after July 19, 2013. 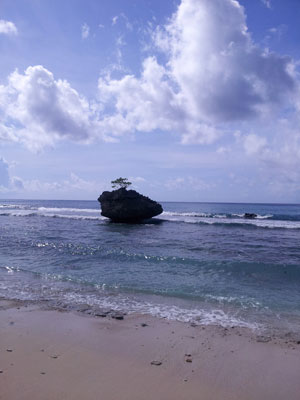 On this Island which holds such striking beauty with its turquoise coloured coral seas, unique wildlife and its welcoming local people, this dark side also lurked, holding within it the cries of desperate human beings who bore the pain of the ‘never’ safe haven in Australia, their hopes figuratively dashed on the rocks of the Island. And yet, strangely in all of this there was, in clear view of the jetty where these asylum seekers had been landed, a small tree stubbornly rooted and growing against all odds in a sharp coral rock. This tree had become a symbol of hope in the midst of despair for many of the asylum seekers, and, indeed for me.
As I sat with Ali all I could offer was a listening ear and attentive heart. In Francis of Assisi’s words: I felt a part of the ‘tears of things’. I found myself absorbing Ali’s sense of helplessness, his desperation in being unable to change the path that would lead his little family and himself into the unknown, yet again. I could find no way to ease his pain or reassure him that ‘All will be well, yes, all will be well’ as a change in policy at that time appeared an impossible dream.

A sliver of hope came in late November last year when a Parliamentary decision was made. Asylum seekers’ cases would be reviewed and Temporary Protection Visas would be granted accordingly. Christmas Island would be cleared of its ‘detainees’. Where are Ali and his family now? Where are the many others with whom I and the other pastoral workers have sat? Have they been granted Temporary Protection Visas? Have they been deported? I may never know all the answers, yet this I do know: They, like the tree rooted in the coral rock on Christmas Island, will cling on, fear and hope daily haunting them, vying for a place in their thoughts. Will they hear the words: Your country is safe now and you’re being returned’? I pray not. Cling on, brave people. Our land needs your courage.