How the Catherine McAuley Rose Came to Baggot Street

This story begins in September 2004 when John Amery, then CEO of the Mater Misericordiae Hospital in Townsville, Queensland (now Mater Health Services North Queensland Limited) was part of a pilgrimage of leaders from Mercy Institutions across Australia and Aotearoa New Zealand to Baggot Street. Here is John's chapter...

(Taken from November 2009 news article on the mercyworld.org website)

'I had eagerly anticipated the week in Mercy International Centre. I was not disappointed. I thoroughly enjoyed the time for its insights, collegiality, and for me a lay person, its education, enlightenment and formation in the spirit of Mercy. It was a time of spiritual awakening in what 'Mercy' means, its history and more importantly, its future. When walking in the sacred garden I felt the need to record a tribute to Catherine McAuley, the woman whose love and commitment to the sick poor led to our hospital providing care to the sick on the opposite side of the world.

The garden was a place of peace and serenity. There were magnificent roses of various colours, shapes and fragrance but no Catherine McAuley Rose. I decided to explore the possibility of bringing a rose bush from Australia. It would be a 'thank you' to the Sisters for their hospitality and kindness. I was very familiar with the rose. We have them growing at home and in the hospital garden. Every year on Mercy Day 24th September as part of our liturgical celebration staff are given a miniature crepe paper Catherine McAuley Rose in recognition of each person’s inherent dignity, and in appreciation for the gifts each brings to the workplace e.g. kindness, hospitality, mercy and the spirit of generosity. The rose is a beautiful symbol for the quality of Mercy, God’s loving kindness which is the spirit of our health care services.

There are a number of issues in transporting plants across the globe, namely quarantine, customs and shipping schedules. After phone calls and emails back to the hospital Supply Manager there seemed a possibility. When things were looking grim a phone call to the Department of Foreign Affairs was the last resort. The Australian Ambassador in Ireland was contacted. He agreed to facilitate the import and in exchange was offered a rose for his beautiful rose garden at his residence in the south of Dublin. So in time the Catherine McAuley roses were shipped, delivered and planted. The rose bushes arrived at Mercy International Centre on the afternoon of the 7th of September 2005 just in time for a ritual in George’s Hill the following day. The MIC Team had decided to offer a Catherine McAuley Rose to the Presentation Sisters as a token of gratitude on the occasion of 175 years after Catherine’s arrival in George’s Hill.'

Anne Copeland was diagnosed with brain cancer in September 2009. She had great devotion to Saint Thérèse of Lisieux , popularly known as 'the Little Flower', as her middle name was Therese. On 1 October, the Feast of the Little Flower, it is customary in Dublin to have roses blessed in the Carmelite Church in Clarendon Street. Anne's sister Mary brought a Catherine McAuley rosebud to have it blessed and gave it to Anne. Anne became very interested in the story of the Catherine McAuley rose and felt it would be wonderful to have a bed of Catherine McAuley roses planted in the rose garden in St. Anne’s park in Raheny (a northern suburb of Dublin). This would honour a great Dublin woman, who was born in Ballymun (then known as Stormanstown) and lived a large portion of her life in Coolock – both places only a few miles distance from St. Anne’s Park. 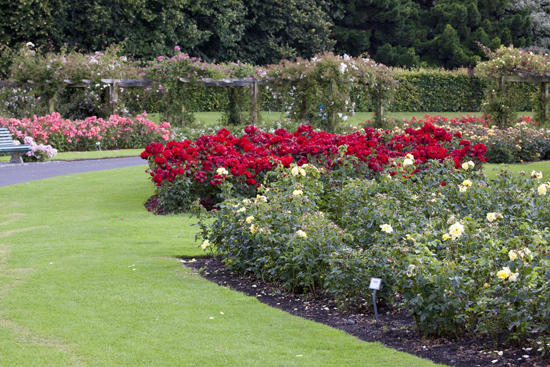 St. Anne’s Park, the second largest municipal park in Dublin, is part of a former 500 acre (2 km²) estate assembled by members of the Guinness family. The Estate was named after the Holy Well on the lands. The park has a number of features including St. Anne's Rose Garden (pictured above) which was opened to the public in 1975. In 1980 it was given a Civic Award by Bord Failte (Tourism Ireland) and the Irish Town Planning Institute, and since 1981 it has been a centre for International Rose Trials.

St. Anne’s Park was prepared to take the rose, as long as sixty or so bushes could be provided. The great challenge was to find a way to get the plants. The USA firm had since closed. A supplier of the Catherine McAuley rose in Australia was identified but transporting live materials from Australia is next to impossible. A supplier in Newtownards in the north of Ireland had some connection with the Australian supplier. A trip to Newtownards proved very useful. They advised that the idea be discussed with Mrs. Hughes, a rose breeder in Dublin, who might be able to help. She was!

Anne and Mrs. Hughes had several conversations. Mrs. Hughes advised that ‘sticks’ be supplied to her from the three existing roses in Ireland which she would then propagate. Anne took on the project with a passion, and kept in touch about it with both Mrs Hughes and Mick Harford, the District Parks Officer for St. Anne's Park. The rose ‘sticks’ were supplied just one week before Anne died in August 2011. 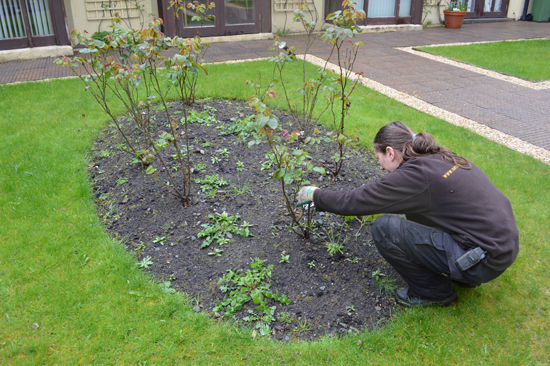 A year later in 2012, fifteen healthy rose bushes were announced. These fifteen were planted in 2013 - nine in the garden at Mercy International Centre, one on Anne’s grave and five in gardens of people who have special connections with Catherine McAuley. The hope is that there will be plenty of blooms this year and that the exercise can be repeated again with Mrs. Hughes. If three original bushes produced fifteen, then we can expect over seventy bushes by next summer (2015). Then it will be a matter of having St. Anne’s Park install a bed of Catherine McAuley roses – a lovely tribute and memory to two great women – Catherine McAuley and Anne Copeland. 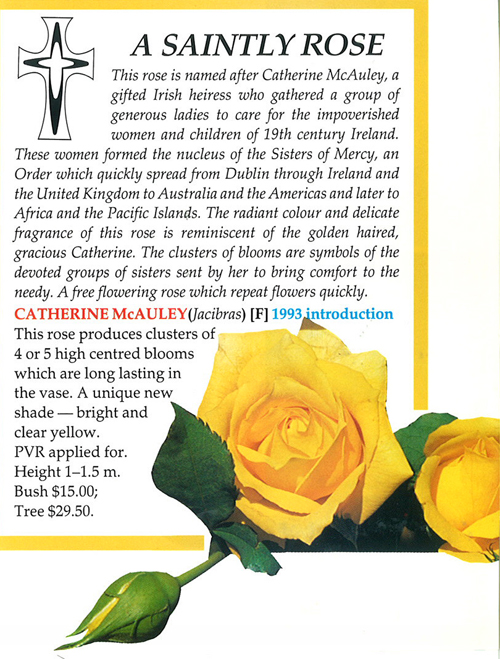 The unnamed rose was introduced in Australia by Swane's Nursery in Dural and Narromine, N.S.W. It received its name as the 'Catherine McAuley Rose' in Australia in honour of the foundress of the Sisters of Mercy.

The average shrub is 2.5 to 5 feet in height (0.75 to 1.5 meters). It produces clusters of 4 or 5 high centred blooms and blooms repeatedly, starting in late spring/early summer. The blooms have a slightly fragrant scent. The shrub's hardiness is USDA Zone 6b (to -20.5 °C / -5 °F) or warmer climates, and can be grown in the ground or in a container (if the container receives winter protection). It has been tested in Australia for both a hot dry climate (e.g., Western NSW) and moist climate (e.g., Sydney) and was found to be well suited for both. The shrub has a high resistance to disease.

For those in Australia, the Catherine McAuley rose can be ordered from Swane's Nursery for dispatch after June 1, 2014 ( AUD $21.95). Proceeds from the sale of this rose bush go to the Sisters of Mercy at the Mater Hospital in Sydney.

Websites with Background Information on the Catherine McAuley Rose:

Roses, Clematis and Peonies and everything gardening related