A 6.5 magnitude earthquake struck Leyte in the central Philippines on 6 July. 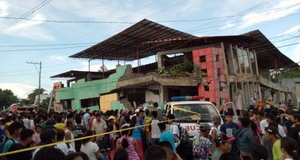 The earthquake's epicentre was located near the city of Tacloban, which was severely damaged during Typhoon Haiyan (Yolanda) in November 2013. [Regular readers of Mercy eNews would remember reading about the impact from the 2013 typhoon on The Religious Sisters of Mercy Congregation convent and ministries situated in Leyte ]

Word has reached us from Marian Ladrera rsm, their Superior General, to ask for the prayers and support of the Mercy community. There have been more than 200 aftershocks in the week since this latest earthquake. Where the Sisters live and work in Milagro  there has been significant damage as it was close to the epicentre of the quake in Ormoc.

Over 500 people are severely impacted in that town in the mountains as their homes are seriously damaged.  The Sisters are providing food and support for the families who are homeless.

In the midst of serious heat and humidity in Tacloban the Sisters are attempting to keep their school and hospital going.

However, they are struggling with the loss of electricity and the problems with the water supply which has also been severely affected by the earthquake. They would appreciate your prayers and support at this time.

Image: Taken from youtube video of damage in Leyte