In Solidarity Against Racism: Ring the Bells This St Patrick's Day Weekend (17-19 March)

The Story of St Patrick

What images come to mind when you think of St. Patrick? Legends and stories abound that portray him as using the shamrock to explain the mystery of the Trinity, climbing high hills to light the fire of Christianity, banishing snakes and serpents that are traditionally imaged as the tempters to wrongdoing, or dressed as a Bishop for a liturgical celebration.

Whether or not these images are based on fact, they run the risk of blinding us to the factual story of St. Patrick's life, told through his own eyes in the Confessions of St. Patrick. It is a story worth recalling, if for no other reason but its relevance to today's reality. Firstly it is the story of a child born into a family of mixed race - Romano /British, who through both exploitation and choice spent most of his life as an immigrant. It is the story of a poor boy of 16 abducted by pirates from his home, trafficked into Ireland and sold as a slave to a wealthy landowner who used him as a child labourer to herd sheep on a mountainside. In his own recall of this experience, he tells of lack of clothing and food, searing loneliness and a darkness of soul that almost consumed him but that led him eventually to a deep faith in God. Describing himself he says 'So I am first of all a simple country person, a refugee, and unlearned'.

After six years of captivity 'Patrick ran away in the hope of finding freedom and risked his life as a stowaway on a ship bound for England. He describes his escape: 'After three days we made it to land, and then for twenty eight days we travelled through the wilderness. Food ran out and great great hunger came over us'. Finally, reunited with his parents, he recounts that 'they pleaded with me that, after all the many tribulations, I should never leave them again'. But deep within Patrick's soul and spirit was the call to become a voluntary migrant - an immigrant missionary who would bring the Christian life of prayer and service to a people who had once mistreated him. His account of his life as a missionary recalls the great joys of serving a people hungry for the service of his ministry and the great pain of being opposed and misjudged by the people of power who felt threatened and disturbed by his beliefs and actions that pushed the boundaries of their comfort zones.

The Joy of the Bells Initiative

It is because of the relevance of Patrick's story to the realities of our world today that we are inviting our Mercy Family to join us in the 'Joy of Bells' initiative during the upcoming St. Patrick's week -end celebrations. This is a simple but profound initiative developed by Church of Ireland, Dean of Waterford, Maria Jannson and endorsed by the former President of Ireland, Mary McAlese. It is an initiative in opposition to what Dean Jannson describes as 'the incredible fear out there being generated towards immigrants and refugees. The bells will be ringing out a message of love, hope and inclusion that we hope will bring comfort to the men, women and children whose lives are blighted by the hatred and bigotry of those who would deny them their dignity and rights as human beings. The bells will ring out as a challenge to all Christians to honour the great commandment to love one another'

So here is the call:

'Ring out misogyny, hate, xenophobia and fear. Ring in solidarity, truth and justice. Drown the sounds of hate with the call to justice. Make a loud noise that those who are made invisible by hate will hear our solidarity.'

To facilitate you in ringing the bells, we are including here a recording of the ringing bell toll of the Mercy International Centre Bell. There are two sounds for you to choose from. Catherine herself would have heard this bell toll. So, too, would her many companions and followers who brought Mercy to other lands to minister to to the Irish immigrants and others, seeking refuge from poverty, sickness and exclusion- Clare Moore, Marianne Creedon, Ursula Frayne, Frances Ward, Cecilia Maher and many others who left their own home and native country to bring the Gospel message to all those in need of God's Mercy. 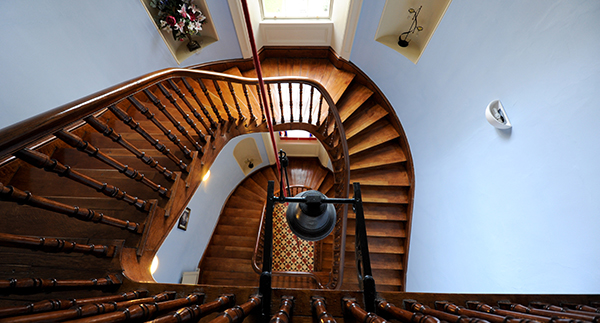 Looking down from the second floor onto Catherine's bell

So at some time from March 17 -19, why not arrange to ring bells wherever you are? You could tune into the Mercy International bell or ring bells on your phone or in your community, school, hospital or other place of ministry. You might like to record your participation by filling in the form on the Christ Church Cathedral website where we are listed as participating worldwide and/or sharing the news with the Mercy family.

This invitation is extended to all around our Mercy world 'at a time when there is worldwide fear and disquiet, we will use this opportunity to peel a very different message, inviting everyone to ring their bells in protest and in hope'.

Migrant Rights Centre Ireland (MRCI) is calling on the Irish Government to introduce a comprehensive time bound Regularisation Scheme with clear criteria. Visit the Centre's website or a site in your country addressing the issue.

Half the World Away: Undocumented in Dublin & New York from Migrant Rights Centre Ireland on Vimeo.