Mercy International Association co- sponsored an important side event at Rio + 20 with the Temple of Understanding and several other interfaith and religious organizations. 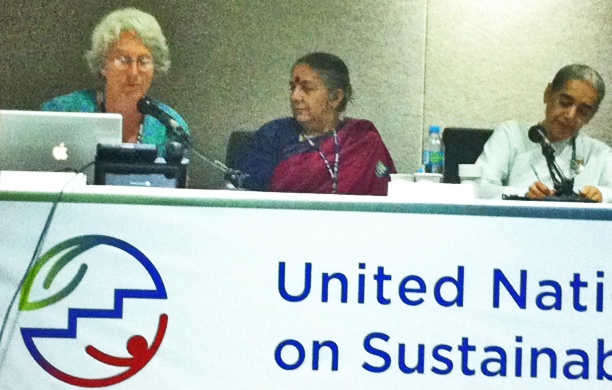 Sr. Mary Bilderback,rsm, reports on Vandana Shiva's central message and on her call for us to join the global movement for seed freedom.

We have learned, Dr. Shiva noted, that separation on the basis of race and gender is no longer acceptable. Science is now showing us that our acute separation from Nature is yielding "unbearable costs, creating total environmental catastrophe."

The words "ecology" and "economy" come from the same Greek root, oikos, the word for home. But our "economy has lost its way and can't come home. The Universal Declaration of the Rights of Mother Earth is a signpost to show us how to get home."

In the spirit of the Occupy Movements, a global movement is growing to occupy public gardens in order to counteract the operative idea that the world is a dead machine, which gives us permission to exhaust, extract and destroy all the natural wealth we can get our hands on and throw it into the market for profit. 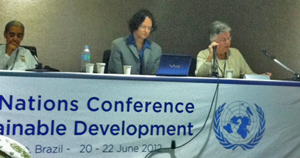 We measure our intelligence by our ingenious capacity to exploit Earth's treasures including the very genome unique to each living species. "Corporations cannot invent life" yet they currently engage in patenting sequences of genes for profit. Genetically modified organisms, GMOs, are creating havoc within traditional farming communities globally. In India, one quarter of a million farmers, unable to farm their lands and feed their families have committed suicide. Yet corporations justify their manipulation of genetic information by pointing to the increasing numbers of hungry people in the world and claiming that genetically modified crops will feed the world.

Dr. Shiva referred to GMO as "God Move Over." GMO crops, however, have not produced dramatic yields as promised. The most that has come from this experiment, after billions of dollars in funding, has been a few plants with resistance to pesticides. Dr. Shiva referenced a new book, called "The GMO Emperor Has No Clothes."

Despite the narrow but widespread notion that human rights will be infringed upon if the rights of Mother Earth are enforced, Dr. Shiva reported that the opposite is true. In actuality "human rights increase as the rights of Nature are respected."?

"What do we do," a woman from Zamibi asked. "In Zambia we must buy GMO seed. It is illegal to save our seeds."

Dr. Shiva responded that we must not obey such laws. We have a higher duty to save the seeds that are given freely for our survival. As Ghandi refused to obey the Salt Law in 1930, we must join the Seed Freedom Campaign. ( info@seedfreedom.) Communities have the right to be be stewards of their own ecosystems. We cannot go along with companies like Monsanto that produce sterile seed for profit, selling what Nature gives freely for our survival. But "we cannot have this discussion in the language of the market on the terrain of the oppressor." We must work to change consciousness.

When asked to suggest concrete actions we can take, Dr. Shiva told us to take on seed saving. Stand up and say ""we do not recognize patents on seeds because we recognize the sacredness of life." Each sacred gathering place, church, temple, mosque should protect biodiversity. Become a seed sanctuary.

We must stand together and do three things all the time:
1. Save seeds.
2. Resist the wrong, non-violently. Use only spiritual force against brute force.
3. Engage in open dialog without subservience.

In conclusion Dr. Shiva asked that all faith traditions contribute one quote that speaks of what the seed means in their tradition for a book to be published in October.