As part of their 25th Anniversary celebrations, six Mercy Associates visited Catherine's House of Mercy recently to take part in the Come Home to Catherine Programme 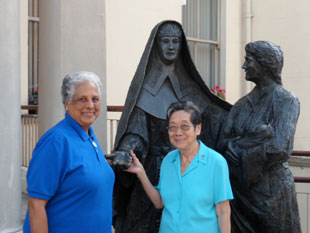 In December 1987, five women came together for the very first meeting of the Mercy Associates in Jamaica. At that meeting, the women - Rheta Chen, Ilsa DuVerney, Celia Hylton, Marcia Thwaites and Janet MacLeod – embarked on a relationship which has had a lasting, empowering and enriching effect on all of their lives.

Twenty five years later, as part of their jubilee celebrations, six Associates – Janet MacLeod, Yvonne Thompson, Monica Schroeter, Dominique Rose, Sheryl Reid and Joyce Archibald, along with Theresa Lowe Ching rsm and Mary Benedict Chung rsm, travelled to Catherine's House on Baggot Street. The group came to take part in the ‘Come Home to Catherine’ programme, which gives participants the opportunity to pray with Catherine in her places and spaces and to walk in her footsteps through the city of Dublin, reflecting on her life and ministry.

The Associates have long wished to travel Ireland. “Since 2002 we dreamed of making the trip to Dublin to take part in a retreat at Catherine's House,” Janet explained. “Then in 2012, Sr. Theresa revived the idea of going to Baggot Street to participate in the Come Home to Catherine programme as a significant event of our 25th anniversary of Associate celebrations.”

Taking part in the Come Home to Catherine programme has been a very important experience for the Jamaican associates. Janet says it has deepened their connection with Catherine McAuley, and shown them how solid a foundation Mercy is, on which to build their house. “In Jamaica we watched a lot of videos and read a lot of books, but this retreat has been a turning point. The powerful presentations on the programme by our facilitators, Anne Reid and Áine Barrins rsm, recreated vivid events from Catherine’s life and immersed us in the realities of her time.” Janet also believes spending time in the house that Catherine McAuley built is particularly important. “The original house physically connects us with the Sisters of Mercy on whose shoulders we stand, and bears testimony to Catherine’s vision to hear the cries of the poor.”

Although she is celebrating her 25th anniversary, Janet recalls her initial reluctance to get involved as an Associate. “I had no experience of nuns" she says, "but when I met Sr Theresa, Sr Shirley Chung and Sr Bernardine Lym – the Mercy trinity I call them – they were so approachable”. Sr Theresa, who was instrumental in establishing the Mercy Associates, reveals that all of the women were chosen as they fitted the criteria the Sisters were looking for in Mercy Associates. “We were looking for people who were committed and had an attraction to the Mercy charism. They were handpicked actually,” she says.

Over the past 25 years, the Sisters and the Associates have collaborated on many projects. In recent years they created the ‘Mercy Advance Programme’ (MAP) - a programme to provide career guidance, personal development and financial assistance to school leavers. At present they are working on the HOME project (House of Mercy Empowerment), to provide temporary housing for women in distress, including those who have not finished High School. HOME also provides personal development and skills training as needed. “So far, we have sponsored three such students and hope to have a residence for a larger group in the future,” explains Sr Theresa.

Bringing vowed and lay Associates of the Mercy community together has been hugely beneficial for both groups. “Being a Mercy Associate is something that has evolved; Mercy is an important dimension, it has enriched and transformed my life” says Janet. According to Sr Theresa it offers mutual enrichment. “The Associates are involved with the Sisters as collaborators in three major aspects of our lives – spirituality, community and ministry. There’s a wonderful understanding between us and a clear mutual empowerment type of collaboration – that is really terrific”

While all of the Mercy Associates wanted to make the trip to Dublin as this is their 25th anniversary, Janet explains that it was not possible. However she reveals that they will be encouraging the rest of the group to make the trip as soon as possible. “We’re going back on a recruiting campaign, we’ve bought some of the music and DVDs so we can recreate some of the moments” she says.

The relationship between the Mercy Associates and the Sisters is one that has worked extremely well. Over the years there have been additions to the group, and sadly some Associates have migrated. There are now 13 Associates in the Island as they approach their 25th anniversary. After a quarter of a century of excellent teamwork, everyone in the Mercy family wishes them many happy returns and very best wishes for the next 25 years of successful collaborations!