The theme of the third Lenten Reflection in this six part series is “Accompanying Refugees”. You are invited to engage with it by:

This Reflection is suitable for both personal and group engagement. 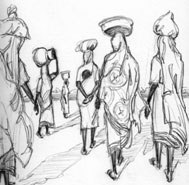 United Nations High Commissioner for Refugees (UNHCR) identifies seven population categories, collectively referred to as “persons of concern to UNHCR”. This includes: (a) refugees; (b) asylum-seekers; (c) Internally Displaced Persons (IDPs); (d) refugees who have returned home (returnees); (e) IDPs who have returned home; (f) stateless persons; and (g) other people who do not fall under any of the above categories but to whom the Office extends its protection and/or assistance activities.

Refugees are persons who "owing to a well-founded fear of being persecuted for reasons of race, religion, nationality, membership of a particular social group, or political opinion, is outside the country of their nationality, and is unable to or, owing to such fear, is unwilling to avail themselves of the protection of that country…"

Asylum-seekers are individuals who have sought international protection and whose claims for refugee status have not yet been determined.

Internally displaced persons are people or groups of individuals who have been forced to leave their homes or places of habitual residence, in particular as a result of, or in order to avoid the effects of armed conflict, situations of generalized violence, violations of human rights or natural- or human-made disasters, and who have not crossed an international border.

Returnees refer to persons who have voluntarily returned to their own countries or places of origins. These include Returned refugees and returned internally displaced persons, both of whose situations the UNHCR monitors.

Stateless persons are individuals not considered as nationals by any State under national laws or who formally possess a nationality but where it is ineffective.

There is currently about 11-12 million refugees and 12-24 million internally displaced persons (IDPs). As refugees tend to flee to countries close to their homelands, approximately 70% of refugees are to be found in Africa and the Middle East. 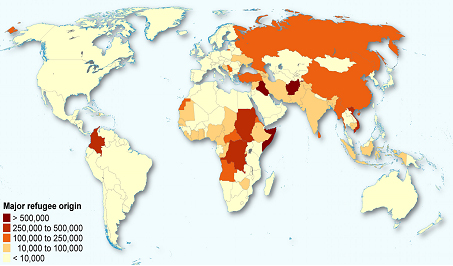 Nora Burke rsm accompanies Kurdish refugees in Ireland. Here she talks about her relationship with one family in specific and how she became involved in her ministry of accompaniment. This presentation was part of Mercy International Association's Lenten Soup & Substance programme, held on 23 March 2011.

Kajal Allakarami is a Kurdish refugee living in Ireland. In this video she tells her story of living in three refugee camps before coming to Ireland. This presentation was part of Mercy International Association's Soup and Substance Lenten Programme held on March 23, 2011.

The bible gives us the ancient custom of welcoming “When a stranger stays with you in your land, do him no wrong. He shall be to you as the native among you. Love him as yourself for you have been strangers in the land of Egypt.”

Quote from Catherine McAuley, foundress of the Sisters of Mercy emphasising the importance of being cordial to strangers.

“Our mutual respect and charity is to be cordial; now cordial signifies something that receives, invigorates, and warms: such should be the effects of our love for each other”.

Engaging the Reflection on Accompanying Refugees

What do you feel called to do as a response to your engagement with this reflection:

… at a personal level?

… in your sphere of influence?

… at a financial level?