Listening, Relating, Responding to the Voices of Trafficked Women

Editor: This morning, 2 September, Angela Reed(ISMAPNG), researcher and advocate on human trafficking, will arrive in New York to take up herappointment at the Mercy Global Action Office in the role of Sister of Mercy in Residence, working with Aine O’Connor, MGA Co-ordinator at the UN. 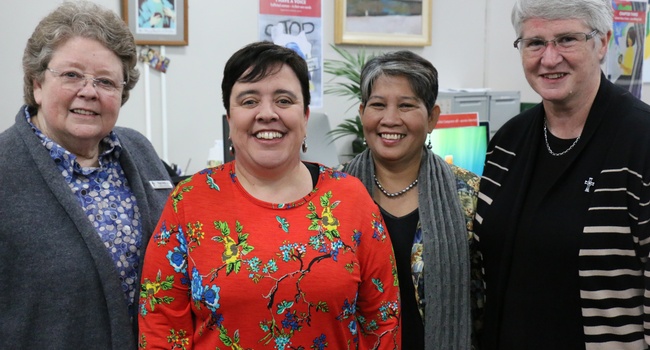 L-r: Faye Kelly(Community Leader South C), Angela Reed, Marietta Latonio, Annette Schneider(Vicar, ISMAPNG) at the Australian launch of 'I Have A Voice: Trafficked Women in their Own Words' on 27 August. Photo: Anne Walsh

'Much of my work has been at the grass roots working with marginalised women as well as my more recent academic pursuits,' said Sr Angela in a recent interview at her Mercy community. 'I believe that learning about advocacy and intervention at the UN will enhance my knowledge and understanding of Global Justice.'

It was during her seven years of working at Mercy Care (now McAuley Care), a safe house for women and children who are victims of family violence, that Sr Angela first encountered victims of sex trafficking. Listening to these women tell their stories and responding to them personally led her to explore the issue in depth, firstly through being awarded a fellowship in ethics in 2008 and most recently her doctoral study. 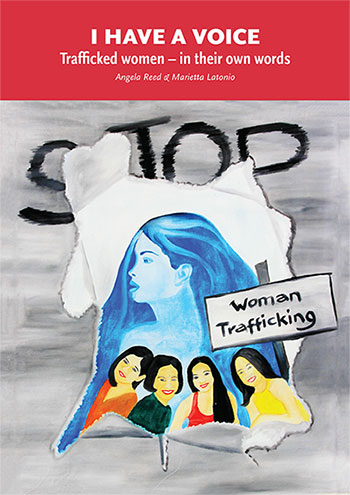 Sr Angela's thesis 'Exploiting Vulnerability: A Study of the Lives of Filipino Women Who Have Been Trafficked into Sex Work', (287pps; PDF) has given a human face to victims of sex trafficking in the Philippines, the country where she chose to do her research, aided by her bi-lingual Filipina assistant, social worker and university lecturer Marietta (Mayet), and where she explored the complex lives of 40 trafficked women through forming relationships of trust.

Now 22 of those stories, in the women's own words and at their request, are available in a book 'I HAVE A VOICE: Trafficked Women in Their Own Words', edited by Sr Angela and Marietta, which was launched by Faye Kelly, Community Leader South C, last Thursday, 27 August in Melbourne. Sr Faye's speech can be read here. Master of Ceremonies for the evening was Denis Moriarty, Group Managing Director of Our Community, the organisation where Sr Angela has been completing herresidency focussing on social change and advocacy. Staff at Our Community designed, produced and published 'I HAVE A VOICE...'

The Australian launch was very well attended by Sisters of Mercy, members of ACRATH, the organisation through which religious orders in Australia address the issue of human trafficking, colleagues from Our Community, Sr Angela's family, friends and members of her broader network.  'I HAVE A VOICE...' was first launched on 18 August in Cebu, Philippines, with many of the trafficked women in attendance. An account of that launch can be read here

Thebook is a rich and moving testament because of  its real and raw life stories. As such, it is an important resource for learning and teaching about the issue of human trafficking and its impact on its victims. Remarkably and so courageously, 22 women chose to honestly share their stories in the hopes that other vulnerable women may learn from those experiences and be prevented from being trafficked. They truly are the authors of the text and their stories deserve to be received by readers with respect for the story-teller and compassion and sensitivity for the story being told. 'Trafficking, like family violence, is not a generic experience. There are so many different expressions, so many different experiences of it that the human story needs to be.

Each story highlights the unique experience of that one woman, her recollections of her childhood, her experiences of being trafficked and, significantly, her hopes for a different future. Each story is accompanied by a series of reflection questions to aid the reader in 'encountering' the woman telling her story and in reflecting on one's own life journey. An important element of the story-telling in each instance is the graceful and sensitively painted illustration by Venus Marie Pegar SFX, a Filipino Sister of the Congregation of St Francis Xavier who is an accomplished and passionate artist.

Click on each thumbnail to view the image and to move through the gallery
The 22 stories are grouped into 3 chapters: 'Childhood -Voices from the Past'; 'Trafficked - Voices of the Vulnerable' and 'Women Voice a Future -Lives Making Links'. By arranging the stories in this way the editors are able to provide for each chapter what they have called a 'Precede' - afor the stories being told under the particular chapter heading: context to the social settings the women were born into (Chapter 1), to the realities of life for many trafficked Filipino women (Chapter 2) and to the hope that someday their lives would be different (Chapter 3).

Sr Angela's approach to her thesis was to use the Life Course perspective, a multidisciplinary approach to looking at a person's story alongside the world that person lives in, including the social, historical, economic and political environments. 'Being born in a certain place at a certain time and having certain experiences lead one to be vulnerable to being trafficked.' An explanation of that perspective in relation to sex trafficking is included in I HAVE A VOICE... (85-87) and clearly influences the way the book has been put together.

'Human trafficking in all its forms is not about poverty, it's about privilege. The world of development, abundance and privilege continues to be that way because it exploits vulnerability.There are many lenses through which to look at human trafficking and many ways to think about itSr Angela. ' If we look at human trafficking through a lens of globalisation, economics, neo-liberalism, migration and crime and corruption, then it is clear that the wealthy and cashed up in the world can demand anything they want from those who have less. If we look through the lens of gender equality, human rights, then there is a clear mandate for us to act, to use our privilege...

Sr Angela is very clear that Sisters of Mercy have an important role to play in addressing all forms of human trafficking. 'It is clear that globalisation and economic policies that favour wealth and the capitalist economy are going to continue to exploit the vulnerable. As Mercies we have to challenge that...' She continued, 'Catherine McAuley cared for and advocated for women who were marginalised and exploited...We believe in the dignity of each person and while my sisters [women] are being exploited in such a way I feel a desire, an obligation, to raise awareness and to hopefully turn it around.

'The gift that the Sisters of Mercy bring is that we are all around the world and so can bring our lens'. It is important says Sr Angela that the Mercy network is educated about the issue, so that we position ourselves in a certain way when we talk about the issue. 'When I talk with people, I encourage them to break down the sensational, to think about the issue from all different lenses, particularly from a human rights lens, to understand it within the context of human lives and journeys and to recognise that the actions we take in daily living, what we assent to, our values  - these impact others. We are all connected.'

Sr Angela's hope for her appointment to MIA at the UN is 'to be able to contribute to an understanding of human trafficking in all its complexity and, at the same time, be open to new learnings and opportunities to enhance our Mercy Mission.'

We wish Sr Angela well in her new ministry, undertaken on behalf of all Sisters of Mercy and Partners-in-Mercy engaged in addressing the issue of human trafficking.

Download an order form for the book here or order online