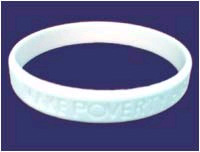 The 'White Arm Band' project that we spoke about in Mercy eNews on March 15th is an attempt to draw attention to, and to begin to address the effects of, global poverty and hunger. By joining in this unique world wide effort we are joining the campaign that says it is time to stop the deaths of more than 200,000 people every week from preventable diseases.

In our MIJN global campaign against poverty we are concentrating especially on African poverty. We are being led in this by Angela Hartigan the MIJN Africa Focal Point Person and the African people that our Sisters work alongside, because they know the plight from being 'on the ground'.

“African poverty and stagnation is the greatest tragedy of our time. Poverty on such a scale demands a forceful response”.

Graham Wood in summary report, Commission for Africa. Tony Blair called African poverty ‘a scar on the conscience of humanity’. Yes, economically speaking, Africa is very, very poor. The commission for Africa again “On the edge of this new century, in an age of unprecedented wealth and economic progress by all continents, it is unacceptable that Africa drifts further from the rest of the world, unseen in its misery and ignored in its pain.” The commission for Africa calls for an alteration in these conditions through a change in policy in favour of the weak. The great nations of the world, in alliance with their African neighbours, must now move together in a common interest, with the ultimate goal of a more equitable world. If the G8 and EU countries can be persuaded to tackle the issues around African poverty in a cohesive manner, then there is some hope that Africa will move a little towards the Millennium Development Goals, rather than slowly falling further behind.

There is need for a new kind of development, based on mutual respect and solidarity. The Commission for Africa is attempting to set the framework for global policies that favour the poor. Friday 1st April is Debt-Watch: Embassy Day of Action. Debt campaigners around the world will be targeting the representatives of richer creditor countries with a demand for debt cancellation. Each of the Focal Point Persons in their Geographic Area will direct the action according to local realities, whilst utilising the methodological process followed in the CD ROM 'Mercy and Justice Shall Meet' . We are choosing to address the issues of global poverty, especially the effects of this on women and children, because were have made an option to join the movement of people who are working to address the Millennium Development Goals and are also keen to focus on our 2nd World MIJN Conference resolution. In all of this we work in close liaison with Deirdre Mullin and Mercy Global Concern and value the great expertise, resources and entree into the United Nations commissions and forums that Deirdre has. The white arm bands may be purchased from OXFAM, Save the Children, World Vision and other organisations. They can also be made and sold with the proceeds given to Mercy projects in developing and poor countries.