Mary MacKillop and the Sisters of Mercy (Australia)

On Sunday, October 17th, Mary MacKillop will be canonised as Australia's First Saint. Mary MacKillop may have lived most of her life in the 19th Century but her canonisation will be live on-line using 21st Century technology.

The webcast, with access instructions and commentary provided by Josephite Sister Giovanni Farquer and Father Mark Podesta, will be available from www.marymackillop.org.au,  the website which was created with the Josephite Sisters by Fraynework, the Mercy communications ministry. Fraynework also designed the banners which adorn the City of Sydney.

The webcast will be available on demand at www.marymackillop.org.au shortly after the ceremony concludes.

The Sisters of St Joseph believe the use of the web in covering Mary MacKillop’s canonisation ensures that everyone is given the opportunity to access the celebrations regardless of where they live. 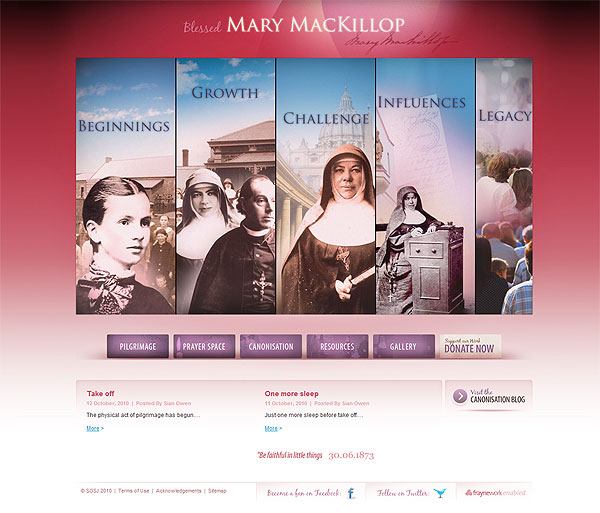 The Sisters of St Joseph and Sisters of Mercy have a long association, not only in Australia, but in Ireland and England.

On August 11, 1874 during Mary's second visit to Ireland she set out for the south for Waterford and then to Dungarvan and Cappoquinn where she stayed with the Sisters of Mercy. The only letter still in our possession of her experience in Ireland is written from the Convent of Mercy, Cappoquinn, August 30, 1874. It is a brief letter telling of her experience in Waterford where the Bishop and Religious thought she was a fake. She writes in the middle of the letter 'May God bless all, but particularly I ask you, dear Sisters, to pray for the Sisters of the Convents in Dungarvan (Presentation and Mercy). I have ever so many little tokens of love from the latter Convent for those of you who have namesakes there, but must keep you waiting for them. They have found me four postulants'

On returning to Dublin, she finds Bishop Matthew Quinn waiting. Paul Gardiner puts it this way:

Mary met Bishop Matthew Quinn on September 7 at the Baggot Street Convent where she was a guest.
This was a hurried meeting and he returned again on September 12 for a further meeting. This was to discuss the situation with regard to the Sisters of St Joseph status in Bathurst diocese. Gardiner p 165.

He also records that Mary had stayed in London with the Sisters of Mercy and that order continued to be hospitable in Dublin. On August 6 when Mary arrived in Dublin for the second time she stayed at Lower Gloucester Street because there was a retreat at Baggot Street. Here is in Lower Gloucester Street 'they playfully say I shall be a Sister of Mercy before I leave them' The same remark was was made in another place where she wore a Mercy habit while her own was being washed (p 164).

In London Mary stayed with the Sisters of Mercy at Blanchfort Square. It was here that the 15 Irish postulants and Mary stayed prior to their departure for Australia.

While travelling north to visit the communities, Mary MacKillop also enjoyed the gracious hospitality of the Sisters of Mercy in Rockhampton.

A video clip reporting on the website launch and launch of a book of Mary MacKillop's letters can be viewed here.