In anticipation of the Church’s celebration of the Jubilee Year of Mercy, Carlow University in Pittsburgh, Pennsylvania commissioned a painting for their newly renovated University Commons. While Our Lady of Mercy was the working title for the painting, she emerged from the canvas as Mary, Mother of Mercy – loving, welcoming, familiar. 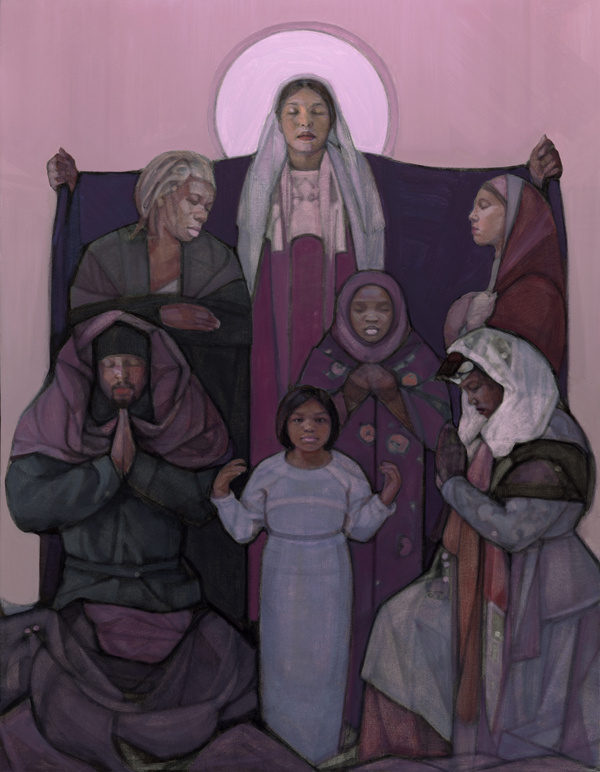 © Janet McKenzie. Image used in this article with permission

The artist chosen for the work was Janet McKenzie. Janet is an internationally known and respected painter, largely of sacred subjects. She is perhaps best known for Jesus of the People, chosen as winner from a field of 1500 submissions of the National Catholic Reporter’s 1999 invitation to artists to create an image of Jesus for the new millennium. She has also published two books featuring her work – Holiness and the Feminine Spirit and The Way of the Cross created in collaboration with Joan Chittester, OSB.

Janet provides the following reflection on her painting of Mary, Mother of Mercy.

Beloved mother Mary protectively and lovingly holds humanity within her mantle. As she loved Jesus so she loves each one of us.

The love I have for my son and my role as a daughter undeniably thread throughout this painting as an emotional undercurrent.

The people I asked to pose for me were carefully and specifically selected and I am indebted to each person who not only agreed to join me on this journey but contributed their image to this painting.

Three racially diverse subjects served as the inspiration for the figure of Mary thereby contributing to a genuinely inclusive and invitational interpretation. The Blessed Mother does not tower over the people within her mantle rather she is similar in size, familiar and relatable. Mary, the unifying force, rises up with outstretched arms holding us within her love - her hands gripping her mantle with strength. Mary’s concern for us is reflected on her face through her inward expression and closed eyes. Her halo glows with possibility encouraging the viewer to linger on Mary’s face.

The inclusive subjects within Mary’s mantle, archetypes symbolizing a small portion of the human race, honor diversity. The aged woman with bowed head on the top left leans in to Mary, opposite her the young woman of mixed Asian ancestry reverentially looks up to the Blessed Mother, the praying male figure, inclusive of the Caucasian race, references Judaism, the wrapped standing child in prayer represents Islam and the kneeling, praying woman celebrates dark skinned people the world over. I gave the action of this painting to a child of Mayan heritage, this beautiful child from Guatemala, who represents indigenous people and Latin America. All have their eyes closed and are in communion with God except for the child who looks out to us. Her stance is one of innocence with her lightly held hands yet her arms present the possibility they may just unfurl into the same protective gesture as Mary. She is the voice of the innocent reminding of the purity of children who are the hope for the future.

My heartfelt wish for this painting is that it will invite prayer and quiet reflection and serve as a warm and welcoming beacon of hope to people of all races, religions, genders and ages.

The painting arrived in Pittsburgh on December 11, the eve of Foundation Day and was unveiled as part of the University’s ritual of opening its Door of Mercy on December 14th. Both of these events occurred within a week of the shootings in San Bernardino, California with its accompanying rise in anti-Muslim, anti-immigrant sentiment. Sheila Carney rsm, the university’s special assistant to the president for Mercy heritage, described the arrival of the painting. “Those of us who welcomed and unwrapped the painting were filled with anticipation as we had chosen not to see it as it gradually came into being. As Mary emerged from the box we were stunned. The violence of our world was so present to us in the surrounding days and into that time of fear and hatred came this image of our embracing and inclusive Mother Mary. When we found our voices we spoke of our gratitude for such a consoling presence.”

Reproductions of Mary, Mother of Mercy are available through Janet’s website www.janetmckenzie.com

Requiem written by singer/songwriter Eliza Gilkyson in relief of the 2004 tsunami in Indonesia taking over 260,000 lives, is one of the pieces of music Janet listened to as she created the painting.
Requiem lyrics can be found here. Purchase Requiem on *iTunes *GooglePlay