A message of support was received from the Cardinal Murphy O’Connor who acknowledged that people living in poverty already feel the effects of Global Warming. We are called to be true witnesses, to care for the earth and care for brothers and sisters around the world.

Climate Change cannot be seen in isolation; a total approach is needed. A healthy environment is necessary as the poorest and vulnerable are most affected.

Greenhouse gas emissions cause Global Warming and as Religious we say something and we can do something. We can be a voice to make the Bill strong. We need decisive action.

Sean McDonagh spoke about the beautiful earth, the garden plant of the universe. We think it so robust but small changes can destroy it. Respect the law of nature.

John Paul II had a real concern for the Earth. In January 2001 he said:

“Humankind has disappointed God. We need ecological conversion. There will be no solution unless we take seriously our lifestyle.”

We have 20 years to bring down the carbon emission. We have a duty of stewardship. Earth cares for us – Gen 2:15 1:28. Service and commitment are needed.

“Conquer” does not mean abuse. Every creature needs care. The rainbow is the sign of the Covenant. We renew the Covenant each time we attend Mass. We are a Community of the Trinity. Jesus became matter when he became one of us.

A plundered, polluted and sick planet cannot sustain life. We cannot have the LIFE that Jesus promised.

A new age has dawned. Cosmic hope is a sign of a future in God. The spirit of God is in the world inspiring people and renewing the face of the earth.

Right relationship with God, ourselves and others. St Francis was a guiding light of hope - he speaks to the heart. Nature is never spent.

Britain is the home of the industrial revolution. We have emitted carbon for years and it is only right that we should take a lead in this threat to our planet.

Britain is the first nation to try to put legislation in place to reduce our Carbon emissions and already 17 Governments have asked for advice. It is important that Britain gets it right.

25% of animals are threatened by Climate Change.

Our role is to provide support and encouragement and model a sustainable path. We are serious about it. Our moral argument is important – The life of the world is at risk.

We have responsibility for those around us and all life. 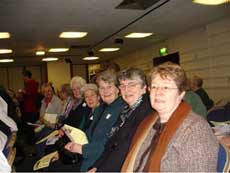 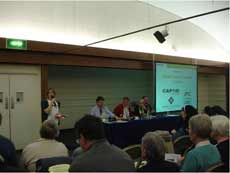 CAFOD briefed the 300 plus religious who gathered at Methodist Central Hall, Westminster 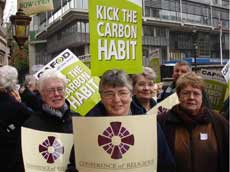 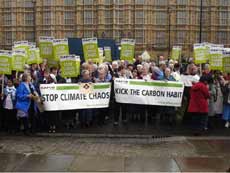 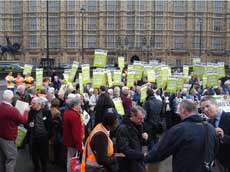 We walked to the Houses of Parliament holding banners 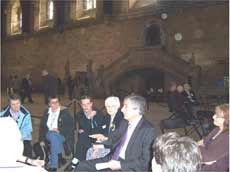 We met our MPs who had been contacted in advance 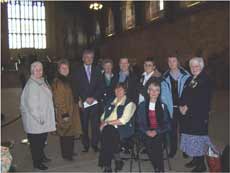 The Sisters meet Jim Fitzpatrick, Minister for the Environment who happened to be our MP.